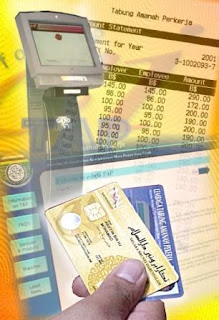 TAP recently celebrated its 15th Anniversary. I attended it as a former Managing Director but I was also one of its founders more than 15 years ago. I guess not many remember that now. In April 1992, Dato Metassan from the Prime Minister's Office, then plain Haji Metassan and I (I was then working in Telecoms as the Corporate Planning Manager - planning the corporatisation of Telecoms) were pulled out of our comfortable offices and placed in a tiny office at the Secretariat Building, given files from a working committee that had been in place for the previous two years and was instructed to set up TAP's operation. I think at that time both of us were a little 'bengang' if one may use the word and really had no idea what it is that we need to do.

Anyway, we set out doing what needs to be done which included spending sometime observing the CPF in Singapore and EPF in Malaysia. By November, we were already briefing changes to payroll systems and by January 1993, it was launched. We had a grand total of 7 staff including us - 4 officers and 3 support staff. There were about 16,000+ employees in our system by that January and that number climbed rapidly. By then we had started to grow too. We got the private sector employees into the TAP system in 1994. I think we were a little bit giddy of we had been able to achieve given the limited resources that we had then. We had no money in January 1993 but today's TAP have about $1.2 billion. We had 16,000 employees in January 1993 and today it is close to a 100,000.

My number one regret was and is the contribution rates. When Singapore and Malaysia launched their provident fund schemes in the 1950s, 5% + 5% was the introductory rate. It took Malaysia some 20+ years and Singapore about 10+ years before the rates was changed. We wanted the TAP introductory rate to be in place for at most 3 to 5 years before nudging it upwards. However when it was time to change it around 1997/1998, it was the financial and economic crisis that hit us and many employers were reluctant to pay a higher contribution rates and a number of employees were also made redundant. The Board had to shelve that idea and that basic introductory rates remained until today.

When I got back as the Acting MD in December 2004, I thought it was the right time to revisit the new rates. Little did I know, I wouldn't be spending much time in my new office. I was away in UBD for the compulsory Executive Management Program until May and by July I was moved again to MOF.

Anyway, the current TAP management is doing a lot of things. They got a great set of people. I love the imaginative financial planning theatre with the Seri Mulyani Sarjana School children. That was very impressive. Anyway, all the best to TAP's Management and hoped that they will be able to achieve a lot more for all the Brunei employees.

ROGUE ECONOMIST said…
Yes, I agree that we need to do something with the contribution rates. If not, then I'm not surprised that we will see an increase in the poverty and/or social problems in the near future. This is not fair to our future generation, who at this moment is already facing an impeding economic problem - diminishing oil and gas.
Wednesday, July 02, 2008 6:02:00 PM

Al-Qadr said…
I am with you, Mrs RE, on your fair assessment. I am not that overly-confident of our meagre TAP dividends due to contribution rate imbalances or wrong investments?

100k current total TAP members and more than a billion dollars have real huge market potentials to be tapped in all the right investment portfolios, I should think.

Why not exploit the 'diminishing' (?!) oil and gas market to its maximum derivatives (I honestly do not know what I am talking about).

Then a new MNC giant could emerge out of oil and gas-rich Brunei i.e. to be in the Ivy League of the old Seven Sisters who were the following companies:

1.Standard Oil of New Jersey (Esso), which merged with Mobil to form ExxonMobil.
2.Royal Dutch Shell (Anglo-Dutch)
3.Anglo-Persian Oil Company (APOC) (British). This later became Anglo-Iranian Oil Company (AIOC), then British Petroleum, and then BP Amoco following a merger with Amoco (which in turn was formerly Standard Oil of Indiana). It is now known solely by the initials BP.
4.Standard Oil Co. of New York ("Socony"). This later became Mobil, which merged with Exxon to form ExxonMobil.
5.Standard Oil of California ("Socal"). This became Chevron, then, upon merging with Texaco, ChevronTexaco. It has since dropped the 'Texaco' suffix, returning to Chevron.
6.Gulf Oil. In 1985 most of Gulf became part of Chevron, with smaller parts becoming part of BP, and Cumberland Farms, in what was at that time the largest merger in world history. A network of stations in the northeastern United States still bears this name.
7.Texaco. Merged with Chevron in 2001. The merged company was known for a time as ChevronTexaco, but in 2005 it changed its name back to Chevron. Texaco remains as a Chevron brand name.
As of 2005, the surviving companies are ExxonMobil, Chevron, Shell, and BP, now members of the "supermajors" group.

Now, picture this: With the help of BIA and other key agencies, PetroleumBRUNEI should look for ways to merge with TOTALFinaElf or Japanese, Korean oil companies or some other international players or neighbouring ASEAN national oil companies e.g PTT to become the new "supermajor". And the people of Brunei Darussalam should be encouraged to invest in this multi-national company through TAP! All filthy-rich individual Bruneian investors should be welcomed too.