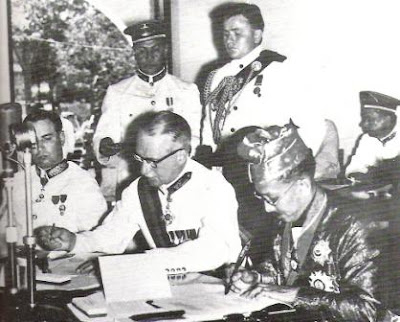 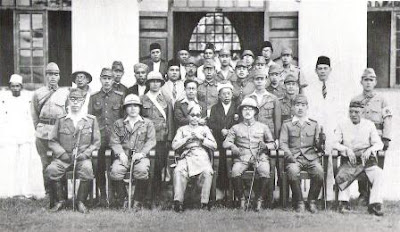 The second request was a photograph of Japanese soldiers. I am not sure what was requested but I do have this photograph of Sultan Ahmad Tajuddin together with the Japanese Army High Command that was here. Though this photogprah was more for public relations by the Japanesea occupying force. The Sultan and his family was forced to run for their life to Tantuya as the Japanese became over bearing in their occupation of Brunei.

Al-Qadr said…
I feel compelled to correct the spelling of Tantaya, BRo (not Tantuya with a u as in Altantuya). Tantaya is near Limbang, I think.

I remember my late father relating to me the story of how Bruneians survived on Sago then (used to make "Ambuyat") as a substitute for rice (strictly rationed by the Japanese Invading Army) in those days of hardship.
Thursday, July 24, 2008 5:19:00 PM