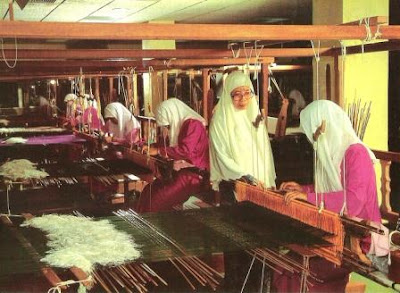 For my article on Brunei Times tomorrow I will be writing about Kain Tenunan and Jong Sarat of Brunei. When I did my research, kain tenunan Brunei has been in existence for at least 600 years or more. Two paragraphs from the article:

According to the Information Department’s handbook entitled ‘The Traditional Handicrafts of Brunei Darussalam’ published in 1994 argued that the earliest recorded mention of cloth-weaving in Brunei Darussalam can be traced to Sultan Bolkiah's reign from 1485 to 1524. Magellan visited Brunei sometime during this period and his official chronicler, Antonia Pigafetta, reported seeing beautiful examples of Brunei handicrafts in particular the woven cloth.

But according to Hajah Kadariah in her book ‘Collection of Brunei Traditional Woven Cloth’ published in 2003 argued that according to the history of China, during the Sung Dynasty (969 - 1279 AD), it was reported that the King of Puni (Brunei) wore a certain cloth around his waist (sinjang), known as Kain Ujong Sarat, a Brunei woven cloth. So by the time of Magellan about 200 years after, the woven cloth should have long established itself in Brunei Darussalam. This shows that in Brunei, cloth weaving was a common cottage industry even in those days.

Buy tomorrow's Brunei Times if you want to read more.