The Japanese Occupation of Brunei 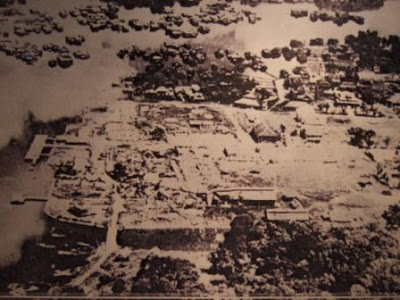 Details of the Japanese occupation of Brunei in the 1940s are neither easily available nor easy to find. This article tries to sketch that short history.

During the Second World War, 10,000 Japanese troops arrived at Kuala Belait. It was on 16th December 1941. Within six days, they managed to occupy the entire country. Despite the Agreement between the British and Brunei, the British did not defend Brunei at all. All they left was a tiny detachment of a Punjab Regiment in Kuching, Sarawak to protect the three territories of British Borneo.

Ironically even though there was no plan to defend the country, there was a contingency plan to deny the Seria oilfields to the Japanese. For that the British did use that tiny detachment of the Punjab Regiment in order to supervise the so called oil denial measures.

These measures included the filling in of all the oil wells with concrete and these were done in September 1941. All the remaining equipment and installations were also destroyed. These were done soon after the attacks on Kota Bahru in Peninsular Malaya and also on the Americans' Pearl Harbour.

According to AVM Horton in his paper entitled ‘The British Residency in Brunei 1906 to 1959’ published in 1984 by the Centre for South East Asia Studies, Hull University, the Japanese concluded an agreement with Sultan Ahmad Tajuddin regarding the administration of Brunei. Inche Ibrahim (later Pehin Datu Perdana Menteri Dato Laila Utama Awang Haji Ibrahim) who was the Secretary to the British Resident before the war, was also appointed as the Chief Administrative Officer or State Secretary acting under a Japanese Governor.

During its administration, the Japense reorganized Brunei’s administration. Brunei became one of five Japanese Prefectures in the former British Borneo or Kalimantan Utara. The Brunei Prefecture included Baram, Labuan, Lawas and Limbang which were all former Brunei territories. This was the only time during modern times that all these territories were recombined to form one Brunei.

His Majesty Sultan Ahmad Tajuddin retained his throne during the War and was bestowed with a pension and Japanese honours. However he had very little to do with the Japanese during the occupation and he together with the royal family left Brunei to stay at a temporary palace at Tantuya in Limbang towards the end of the Second World War.

Most of the Malay government officers stayed put at their posts. According to a Colonial Office paper, they retained their salaries under the Japanese government. They together with Pehin Ibrahim tried to provide as best an effective government machinery as they could.

The Japanese kept control of the coastal areas and riverine settlements. Occasionally soldiers of the 37th Army do send infrequent patrols inland but they made no real attempt to try to bring the interior part under the Japanese.

Dr Reece in his book ‘The Name of Brooke: The End of the White Rajah Rule in Sarawak’ published in 1982 described the efforts done by the Japanese. These included creating community councils and women’s organization (Kaum Ibu). A number of Bruneians were trained in Japan including Pengiran Yusuf (later YAM Pengiran Setia Negara Pengiran Haji Mohd Yusuf). Pengiran Yusuf was in Hiroshima when the Americans obliterated the city with an atomic bomb. He survived the bombing and in his latter career became the State Secretary and Chief Minister of Brunei.

The Japanese tried to stir up anti-European sentiments among the students in Brunei as well as among the adults. In schools, Japanese was taught to students. Government officers were required to learn Japanese in night classes.

There was not much infrastructure development in Brunei during the War except for the first airport runaway in Brunei. This was built during the Japanese occupation at the current Old Airport Government Buildings Complex. After the end of the war, despite being heavily shelled by the Allied Forces, that runaway was repaired and improved by the same forces and a proper airport was built.

Horton described that the Japanese despite being occupiers were not ‘too much hated’ by the people though it was ‘very dangerous if one did not toe their line.’ The Japanese were seen as ‘harsh’ and ‘drove the workers hard’ but were ‘well-disciplined and ‘did not molest the local women’. During the early stages of the occupation, the Kempetai (Japanese Military Police) did not execute anyone but they were greatly feared.

In general, the Japanese left the public largely alone. A British Military Administration (BMA), the new body taking over after the war, described that ‘after the invasion, the Japanese attempted to carry on the former machinery of government, but there was soon a complete breakdown in the methods of administration’. The report also described that no attempt was made by Japanese to carry out or maintain public works. They relied on such revenues as they could by granting gambling licenses and monopolies of trade.

The Japanese brought in a new currency popularly known by the locals as ‘duit pisang’ (banana money) even though only the $10 note depicted a banana tree. The paper notes ranged from one cent to $1,000. By 1943, when the tide of the war turned against the Japanese, these notes became almost worthless.

Towards the end of the war, the former benevolent Japanese Governor was replaced. The Japanese became increasingly paranoid and life for many Bruneians became harder and many chose to flee into the jungle. Stocks of everything from food to medicine ran out. All the Bruneians had to make do and some were even seen wearing barks from trees as their clothes. They suffered from malnutrition and endemic diseases.

From 1943, the Allied Forces attacked many ships and trade was at a standstill. As the Allied advanced, the Japanese turned Brunei Bay and Labuan as a naval base. But allied bombing rendered the base useless.

On 10th June 1945, the Australians landed at Muara under ‘Operation Oboe’ to recapture Brunei. They were supported by American air and naval units. Brunei Town was captured in three days after a heavy bombing campaign by the Allied Forces which virtually destroyed and flattened the city including the Mosque. The only thing left standing was a Chinese Temple, then located at the river front wharf.

The British Military Administration took over from the Japanese and stayed on until July 1946. It was not until September 1946 that the British Resident returned back to Brunei.

d440 said…
Hey,do you have any more information on the Bombing of Brunei Town when the Australians tried to take over the Japanese? The chinese temple that remained, is it the one next to the PGGMB building in Bandar?
Monday, August 25, 2008 12:29:00 PM

Anonymous said…
"Despite the Agreement between the British and Brunei, the British did not defend Brunei at all".

daasdasda said…
I thought the British Soldiers are unprepared,thats what i red in the history book form 2/year 8 :) by the way i wanted to know how they landed in Brunei. Answer it as fast as you can :) its for my history project
(safwan96)
facebook:safwan razalie(haji safwan haji razalie)
Monday, July 26, 2010 3:24:00 PM

Aardvark 99 said…
A very i treating article. Did the Brunei volunteer force ever get formed ?