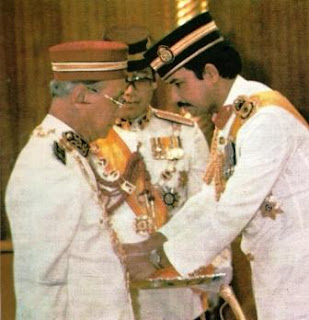 On the occasion of His Majesty’s Birthday which is the fifteenth of every July for our current Sultan Haji Hassanal Bolkiah Muizzadin Waddaullah, there will be a few very deserving people who will be getting their honours. For some of them, they will also automatically get a title that goes by receiving that honours.

The Brunei Birthday Honours is similar to the British Birthday Honours given by the Queen. The honours system is a means of rewarding the citizens and other individuals for their personal bravery, achievement, or service to the country. The system consists of three types of award: honours, decorations and medals:

Historically, it is not known when the first honours and titles were awarded. But certainly by the 14th century, when the Brunei Sultans were already reigning in Brunei, titles and presumably honours were already in place. The Sultan was at the top of a pyramid of officials with wazirs and cheterias as well as pehin manteris assisting him. Titles must have been given to lower officials who assisted them including the title of Dato.

Honours are split into different classes ("orders"). Each order is graded so as to distinguish the different degrees of achievement or service. In Brunei, there is a committee which meets to discuss the candidates and decide which ones deserve which type of award and at what level.

Candidates are identified by the various ministries and departments. Normally if the recipient is a foreigner, permission is asked before the candidate can be awarded. Similarly if a foreign country was to award any form of honours to a Bruneian, permission must be sought from the government before that honours can be received or before the title, if any, can be used by the recipient.

In the past, the honours were also awarded during His Majesty’s visit to that particular district. Usually several honours will be given out to the residents of the district. Honours can also be awarded during visits by foreign dignitaries to Brunei. Sometimes it can also be awarded to the foreign dignitary when His Majesty is visiting those countries.

Whereas medals are awarded by His Majesty but are always presented by HRH The Crown Prince or by one of His Majesty's brothers a few months later.

The Bintang Kebesaran come in several different categories. Each category is for different classes of recipients.

Darjah Seri Ugama Islam is of course awarded to Islamic clerics or those who served in the religious service.

Darjah Paduka Seri Laila Jasa Keberanian is of course for the military and the police.

Each category has several classes. It is the second and first class of each category which will give the title Dato. However for being awarded the decoration or bintang kebesaran, the recipients in addition to the title in front of their names, if any, will also get to keep the letters behind their names. The list of different categories of Orders, the classes in each Order, the letters to be used at the end of one’s name and the titles, if any (to be used in front of the recipients’ names), associated with that class:-

Non-Bruneians traditionally get the Darjah Paduka Seri Laila Jasa Yang Amat Berjasa even though Bruneians have also been awarded this in the past. It is possible to get even higher and higher orders. The title that will be used will be the highest one that the recipient received.

Normally the lowest decoration order government officers get will be the PSB and for religious officers the PUB.

So, come 15th July 2008, if you are watching on television or reading the news of His Majesty handing out the awards, this writer hopes that this article can be used as a guide. If one of you readers is one of the recipients, this writer offers his heartiest congratulations for receiving the well deserved award.