February 21, 2007
If you drive along Jalan Tutong, immediately past the Shell Filling Station at Kampung Bunut, you will see a simpang entering into Kampung Bunut with a sign that says "MAKAM DI LUBA". For the non-Malays, Makam means a grave normally associated with royalties or great men and women. I like many countless others have passed by that road sign so many times ever since we build a house further up along Jalan Tutong but have never gone in to see what it is. I have said to myself that I would visit that place one of these days. In fact I have gone into the Bunut area many times, when my son was much younger, the Health Clinic was in that area. A late colleague of mine whom I always asked to accompany me, used to live even nearer the actual simpang to the makam.

But it wasn't until last Monday that I actually drove in all the way to the Makam and actually saw the Masoleum. The drive from Jalan Tutong is less than 5 minutes. Once you enter the simpang from Jalan Tutong, you drive straight all the way to the end of the road, you will be passing by the Bunut Post Office, the relatively famous Nasi Kandar Restaurant (authentic Nasi Kandar from Penang), past a ready mixed cement company and at the end the road will do a 90 degree turning to the right and just follow that road until you see two abandoned police trucks and you will see another "MAKAM Di LUBA" sign. Turn into that road and you will see a little carpark and a little pedestrian bridge. 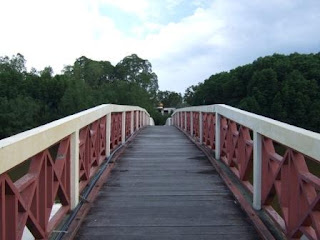 The makam is actually on an island called Pulau Luba. The island separated the two rivers, the Damuan River and much larger Brunei River on the other side. The pedestrian bridge is for you to cross the Brunei River. Across the river, you can see the makam halfway up a hill. I walked halfway across the river, took a couple of photographs and walked back as it was very late when I got there. I am unable to describe what the actual makam looked like inside.

The makam is the grave of Sultan Husain Kamaluddin, Brunei's 16th Sultan. He was the second son of Sultan Haji Muhammad Ali, the 12th Sultan. In those times, it was a fairly tumultous time in Brunei's history. The civil war occurred then and it was during those times that Brunei probably lost control over the Eastern half of Borneo allowing Sambas and Sulu to become independent and setting up the loss of Sabah at the same time. 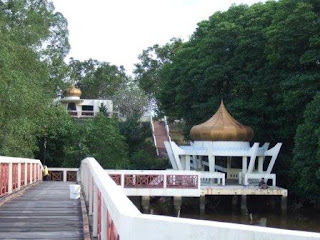 Sultan Husain was probably very old when he took over the throne from his cousin, Sultan Nasruddin. But he was said to be a very pious man and supposed to posses supernatural powers. He was the only Sultan to have ruled twice. He ruled from 1710 to 1730 before abdicating in favour of his son in law, Sultan Muhammad Alauddin and then took over the throne again 1737 to 1740 when his son in law died. He died in 1740 and was known as Marhum di Luba.

Surprisingly for such a period in Brunei's history, it was during his and his son-in-law's reigns, the Salasilah - the Brunei's Royal Genealogical Tablet was done. I always think that both were aware of what was happenning to the Sultanate - the beginning of the loss of the coastal regions of Borneo. In another surprising matter, both him and the son in law were credited with creating Brunei's first currency known as the Pitis. 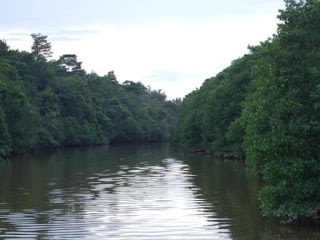 This Makam like Sultan Bolkiah's Makam in Kota Batu is probably one of the easiest royal grave to visit. There are a number of other royal masoleums but not as easily accessible or signposted as this one. It's a good half day visit and with this one you can even see the relative quiet life of the Brunei River as an added bonus.
history makam di luba tourism

Anonymous said…
mr br, slight correction... the bridge is to cross the damuan river. brunei river is on the opposite side, we used to visit makam di luba by boat and go up the jetty.

Anonymous said…
The simpang to my house is only 50m away from the Makam Luba simpang, but I've never visited that Makam since the day the roads of Kampung Bunut improved dramatically. Trust me, we used to have to drive over a wooden bridge in order to cross the mini-river that's right next to the Makam Luba simpang! There were times when I thought our old Pajero would not be able to make it across, and we'd all drown and get eaten by crocodiles!

Well, I HAVE gone in there with 'ghosthunting' friends at stupid o'clock one time hoping to see the pontibaby or other types of ghosts since it's right next to the forest and the river, but to no avail...

However, the truth is that I'm scared to actually cross that bridge, go up those stairs, and find out what's on top of that hill. Yes, 'Makam Luba'... but 'what ifs', ya know? Sometimes when I pass by that simpang at night, the looming darkness of the Makam Luba [there was a near-full moon when my friends and I went ghosthunting that one time] and its surroundings makes me not want to look to my left and drive onwards, straight home.

On a much related note, I am quite honoured to live in a kampung that has a few pretty cool landmarks, like the ones you've mentioned in this entry; it definitely has more than most other Kampungs!

Maybe I should write a blog entry about this one day. That's an idea! Thanks Mr. BR!

BRUNEI resources said…
zippy: HMG is right. He was always an expert on computer graphics. I used to be amazed what he can do with his laptop. We all missed him.
Saturday, February 24, 2007 6:01:00 AM

Anonymous said…
Thank you for your kind words about him. Indeed he is well missed.

Sorry for being totally off-topic with that addendum, but I just had to know...

Anonymous said…
Just being curious. This statement "..before abdicating in favour of his son-in-law..." occurred many times in the history books including the plaque at his "makam" and I believe nobody, even the historians, tried to research the reasons why Sultan Hussin Kamaluddin favoured his son-in-law instead passing the throne to his sons. By doing so, whoever reigns after is no longer "gahara".
Monday, January 14, 2008 7:26:00 AM

Hairani said…
We passed by this area today with ASEAN delegates along the Brunei River. Dalam hati, I said I definitely would want to visit Makam di Luba one day. However, it looked liked nobody has been there for quite some time. Thus, I don't think this place is for the faint hearted. ��