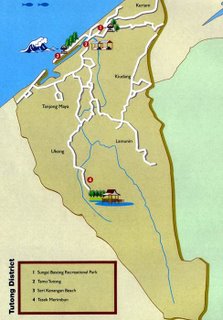 Last night I was reading a 1993 Beriga - a publication of Dewan Bahasa Pustaka Brunei - which contained an article about the folks in Tutong or better known as Orang Tutong. Most Bruneians recognise that among all the various Malay groups in Brunei, Orang Melayu Tutong has an interesting language only known to Tutongians. I used to know a little bit of the language when I was staying in Tutong and attended my Primary 1 school in Bukit Bendera in 1969.

The article in fact described or to use a better word theorise about the beginning of the Orang Tutong which in itself is very interesting as well as the history of the language. According to a chart done by a linguistic expert Robert Blust, the Tutong Language belong to a family of the Northern Sarawak language which is a part of the Austronesia language. Austronesia language comprises all the Malay, Indonesian languages stretching from the Madagascar to the Pacific Islands and from Taiwan to Easter Island. The Tutong language is part of the Northern Sarawak language which is made up of languages along the beaches from Bintulu to Tutong which included Berawan, Kiput, Narum, Lelak, Lemeting, Dali, Miri, Belait and Tutong known as the Baram Hilir language.

According to the historical research, the Tutong area used to be part of the Melanau government before the 14th century, most likely the early Tutong settlers were people from the Baram Hilir area and hence the similarity of the language. It was likely that the early settlers first settled in Lurah Saban in Tutong. When the Brunei Sultanate was formed around the 15th century, the sultanate took over the Tutong area from the Melanaus and since then Tutong has become a part of Brunei.

There are a lot more in that article about the origins of Tutong and the Tutong people and I would write more about that in the future.

Anonymous said…
Quite interesting article Mr. BR. Its short but at least this reminds me of the diversity we have here in NBD. Despite that diversity in language, culture, religion and belief, customs and traditions, we Bruneians are lucky enough (anugerah dan rahmat Illahi for sure) that we have been able to sleep soundly every night. That, I think, partly is because of the inter-ethnic and inter-racial marriages that we observed in this country. National policies on this related matter must also have their part in ensuring this inter-cultural and inter-racial harmony. We must maintain and develop this further to ensure a Brunei Darussalam that is really darussalam or abode of peace and tranquility for generations to come.

On the topic of origin of orang Tutong, perhaps much more research may be needed and we do hope that some Bruneian history or linguistic bloggers have something better to offer. Language as I have read is directly related to ethnicity. On this matter, just to add a bit to the above topic kindly written by Mr. BR, I knew that the Tutong language (its not dialect) has a lot of similarities with the Sang Jati (Dusun) language. Quite interestingly, these two puaks, Tutong and Dusun live or are located side by side harmoniously in the Tutong and partly in the Belait Districts. Indeed in one of the two kampongs which are adjacent to each other, I heard that inter-marriages between the two puaks aeons ago have actually blurred the identity of some of the orang Tutongs. That is , whether they are originally orang Tutong or orang Tutong because they have embraced Islam. The latter, is actually one characteristic that used to differentiate the two puaks, although not necessarily, especially now that more and more Dusuns also embrace Islam.

Crossing the border (the sea actually), there are also known similarities between Tutong, Dusun and Tagalog, a language spoken by the Filipinos. I also overheard one community in Kalimantan who claimed that they are also orang Tutong and called their place Kampong Tutong.

So there's a lot of interesting facts about people, language, culture, customs and the like in this area which we only half- or less-know. I just hope that linguistic researchers and historians (UBD and Pusat sejarah)have enough time and money to do more about the really hidden treasures of Brunei. The intention of course is not to put each people or community in one odfferent basket but to learn that diversity in itself is a beauty that need to be treasured and appreciated. Perhaps, more than that, to learn why we have been like this for so long - I have even heard a few persons of one unrelated racial group claiming that the other person or family is like his own saudara. Imagine that, and this is something that we need to sustain - bukannya economic sustainability saja.
Wednesday, December 20, 2006 1:59:00 PM

As it is the gem of Brunei language...it should be upgraded as top language in Brunei University.

Maybe Indonesia University has to do more research of this language...and help to make it as Brunei national language.
Wednesday, June 08, 2011 2:07:00 PM