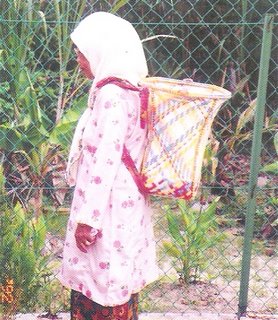 Sometimes we take things for granted. Take 'takiding' which is the basket that were used to carry things in Brunei Darussalam. It is not used very much or at all nowadays but everyone knows what it looks like and what it is. It was previously used mostly in farms when farm produce or fruits are picked, they are kept in the 'takiding' carried all the time at the farmer's back.

We all know that it is made out of bamboo but not much more beyond that. According to one article I read in the Berita Muzium, one villager in 1996 described that the art of weaving bamboo into baskets was a Kedayan speciality and for the Kedayans in the Brunei/Muara District, it originated from two villages - Sengkurong and Tanjung Nangka as they formed the majority of the villagers. According to the Kulapis Village Head, another village, Mulaut was also another village where the art of weaving took place and the 'technology' was later transferred to the Kulapis villagers.

To make the 'takiding', there are several materials require which include buluh (bamboo) which can be buluh tebal, buluh arnab, buluh tamiang and buluh liat. Buluh liat is also known as 'meikong buaya' literally crocodile's tail. I am not sure why. Other materials include bamban which is the bark or skin of a type of wood, rotan (mature bamboo), salingkawang (type of root - used as the rope to bind the takiding), timbaran (another skin/bark used as the harnass) and water (used to soften the other materials).

The whole article in the Berita Muzium actually described the whole art of the weaving - made up of about 10 separate steps. I won't go into detail but I will make the whole article available on pdf and will post it up on main library at www.bruneiresources.com.

Anonymous said…
Cool. I wish i could learn how to make it when I was little. Woundn't it be great if arts and craft were put into primary schools as a required/optional ECA. So such a skill will not be totally lost and continue on in the younger generation.
Saturday, December 16, 2006 10:41:00 AM