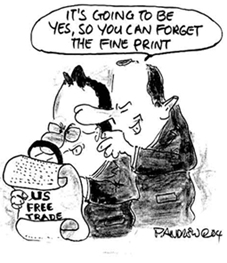 When we got in into Seoul for the Asian Bellagio Economic Experts Meeting at about noon yesterday, I was quite surprised to see many policemen with guns, shields and anti-riot gear positioned all over the city. I didn't realise that the Korean workers are having a huge rally and demonstration arguing against the on-going negotiation for the Korean-USA FTA (free trade agreement) for three weeks starting last week. The city almost came to a stand still as there were many people - those in the demonstration, those trying to stop them, those trying to watch and those that just want to get out of the way like us.

The irony is that to start the Korean-USA talks took quite a while. The sticking point was because of Korea’s ’screen quota’ system, requiring local cinemas to project a minimum number of hours of Korean films. If agreed, the implications of the Korean-USA FTA will stretch far beyond Korean movie houses as the agreement would open the entire Korean economy to US corporate penetration. However reading from the various editorial opinions, the Korean-USA FTA looks almost impossible to conclude as there are many sticking issues including agricultural plus the fact that President Bush is running out of time as his mandate to fastrack agreements ends early next year. Even without the demonstrations, the two governments may not be able to agree anyway - well, at least not right away.

So far Korea has only signed an FTA with Chile. Now, compare that to Brunei. Added to the recent P4 FTA signing during APEC Summit in Hanoi, we have a number of FTAs already. According to APEC, Brunei has already had FTAs with 8 APEC Economies - Chile, Indonesia, Malaysia, New Zealand, Philippines, Singapore, Thailand and Vietnam and is currently negotiating with 4 APEC Economies - Australia, China, Japan and Korea. Here's the thing - the farmers, the factory workers and the actors in Korea realised the implications of any Korean FTA and are prepared to fight for it - be it rightly or wrongly. We in Brunei, for some of you, have never even realised that we have had that many FTAs. In fact the first question people ask when I asked their opinion is - what's an FTA? The second question people ask - does is matter? They don't see anything that affects their day to day living - we still get our fruits from Australia or our cars from Japan despite having no FTAs. The ones that we have don't seem to have any impact what so ever. So, what do FTAs do anyway?

A Free Trade Area is a region (made up of two or more countries) in which obstacles to unrestricted trade have been reduced to a minimum. To avoid evasion (through re-exportation) these countries use the system of certification of origin most commonly called Rules of Origin, where there is a requirement for the minimum extent of local material inputs and local transformations adding value to the goods. Goods that don't cover these minimum requirements are not entitled for the special treatment envisioned in the free trade area provisions. The aim of an FTA is to reduce barriers to easy exchange so that trade can grow as a result of specialisation, division of labour, and most importantly via (the theory and practice of) comparative advantage. The theory of comparative advantage argues that in an unrestricted marketplace (in equilibrium) each source of production will tend to specialize in that activity where it has comparative (rather than absolute) advantage. The theory argues that the net result will be an increase in income and ultimately wealth and well-being for everyone in the free trade area. (adapated from wikipedia.com)

FTAs are good - in theory. But if they are so good - why the protests? This is because the theory refers only to aggregate wealth and says nothing about the distribution of wealth. In fact there may be significant losers, in particular among the recently protected industries with a comparative disadvantage - like the Korean farmers, factory workers and the actors. The proponent of free trade however argues that the gains of the gainers exceed the losses of the losers - that's the rest of the consumers and probably some producers. Liking or hating FTAs depend on which side of the economy you will be. I like what Raja Petra Kamaruddin wrote in malaysiatoday.com about the Malaysia-Japan FTA: "...well, Japanese motor vehicles will be allowed free access to the Malaysian market at the expense of Proton. In turn, Malaysian vegetables will be allowed free access to the Japanese market; in the event Japanese eat Kangkong..."

At the moment in Brunei, it does not matter either way - we gain by being good international citizens as we don't have anything else major that we export other than the oil and gas. But should we have anything else major to export in the future, the FTAs might allow us to export those items. However because these goods are now allowed in from those countries and if they hold comparative advantages in those goods - then there is also the possibility that we may not be able to gain a foothold at all in making those goods. In our quest to diversify the economy, we may want to take all this into consideration when developing our policies.PS. For those (ie economic students) who want to read further about economic integration and fta etc (complete with graphs on the economic benefits and losses), I found a teacher's personal website for his students in Hongkong which is very good. Link here.

Anonymous said…
thank you and thank you for the link as well. that was very informative. i wish our local press explain things clearly too instead of just reporting the news.
Friday, December 01, 2006 3:49:00 PM

Anonymous said…
I have not followed the current events of the Korean-US FTA but the Koreans are infamous for staging protests against trade liberalisation, of particular note is the time when a/some Korean peasant farmers committed suicide in protest at a WTO meeting. For these farmers, their farm/rice paddy are their only means of livelihood, so they worry that an FTA may result in an increase in importation of cheaper rice as they would not be able to compete.
Friday, December 01, 2006 11:30:00 PM