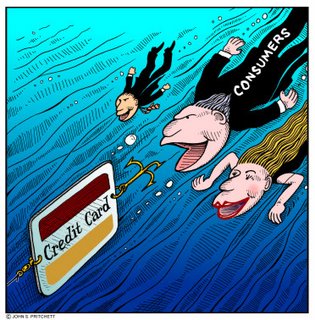 The other day I received one of those 'if you don't pay, we will take you to court and by the way your card is now cancelled' letter from a local bank. What I did not realise was that a credit card, which I signed up more than a year ago with the bank because the MD practically shoved the application form under my nose when I was their guest of honour for launching one of their products, had an annual fee due. All this while, I have never bothered much with the monthly statements as I never used the card but apparently about 2 months ago, the annual $100 fee was due. I didn't pay that until the subsequent month when a late fee and some other charges were also imposed. Anyway since it is still my fault, I paid all that but despite that the letter came. I thought that was very prompt of their credit control system and if all banks had this kind of control, there would be less people in debt.

A couple of days ago, another local bank gave me their platinum card which was recently launched, all I had to do was sign the form and the card will be activated. I read the brochure - all full of interesting stuffs like ability to play golf anywhere in the world etc. At first I thought, wow! Free card. But then I realised, it's not free money. There is a cost to this. For instance there was the $280 annual fee plus other usual credit card interest charges.

Historically credit cards started off as merchant credit schemes and first used around 1920s in the USA to sell petrol. In the 1930s, companies started accepting each other's cards and by 1950 the first Diners Club card was introduced followed by the American Express. Visa came in 1958 originally issued by Bank of America as the BankAmericancard and Mastercard came in 1966. Economically, some economists have stated that credit card use increases the "velocity" of money in an economy thus resulting in higher spending which led to higher GDP (which of course conveniently forgets about the higher credits and debts).

Many Bruneians carry them and I heard that in the past many students come back from their overseas studies carrying debts on their credit cards issued abroad. Nowadays both local and overseas students are not spared. Many people now carry credit cards as they are now easily available in Brunei and some cards are easier to get depending on which banks issued them. Many merchants in Brunei now accept them and even government departments now allow for credit cards to be used to pay for the utility bills. With the recent ruling on loan caps, a number of consumers turn to credit cards to finance their purchases including their daily needs.

Most importantly a lot of credit card users do not realise the amount of real rates which they pay for their credit cards. Even a simple $1,000 credit, if one was to pay only the minimum $50 a month and with a charge of around 2.5%, will take more than 2 years to pay off and by then the amount of interest payment would be more than a third of the original principal. Imagine if the value is higher and in the meantime the card's debts increased. With credit cards, purchases became easier. Even if it is a heavy ticket item - say a $3,000 plasma tv - a cardholder can easily justify it by thinking not in terms of $3,000 but in terms of the 5% monthly payment which is about $150 a month. Psychologically that plasma tv suddenly looked so much more affordable as the thinking is $3,000 versus $150 (never mind that $150 will be for at least 2 years plus interest). Once, used to easy credit, users find it easier to buy things on the spur and without deliberating too much. Swipe it and sign it. It's so much easier to keep up with the Joneses nowadays.

Anonymous said…
I have 4 credit cards!!Bloody banks got me!!2 cards never been used, one card will be all cleared up this month (and i dont intend to use it again,EVER!), and one card (with the highest credit limit), im still workin my butt off to clear due to crazy spending in europe..whch was 6 months ago!!i paid $500 mthly and seemed like the due amount is taking forever to clear!!A fren of mine told me to read the backside of the bill, oh man..2% mthly interest!!thats like 24% annually!!!baik plng meloan!!that 24% amount wud look better in my savings account!!

And i thought banks are places to keep our money..now i know they sucked into us to keep our money..AWAY frm us!!Thats their new role. As banks, y cant they promote positive stuff to the community?cubatah ah..dari mempromo be utang,baik plng mempromo savings, melaburkah.. They know most of us are weak at temptations. They know. They help alrite (come borrow our money!come use credit cards!Use our money!)but it comes with a price - interest,charges,fees,etc..
Saturday, December 23, 2006 8:39:00 AM

Anonymous said…
Let's face it, the banking fraternity doesn't give a damn on debtors since they full well know millions more Mainland Chinese... oops! Thousands more Bruneians are forming long lines outside their banks 'begging' for more and more plastic money and credit limits increases. What can I say? MONEY IS THE ROOT OF ALL EVILS!
Sunday, December 24, 2006 8:00:00 AM

Anonymous said…
hey Hamakraminus, not everybody is as bright (hmm..WILLPOWERED, to be exact)as u. Such a shame that u didnt get my point.
Tuesday, December 26, 2006 2:42:00 PM

Unknown said…
Credit card usage in different places for expenditure. Most of the people don't know how to use it properly, so they ruin theirself by using these plastic credit cards.
Plastic Business Card
Thursday, December 17, 2009 3:58:00 PM