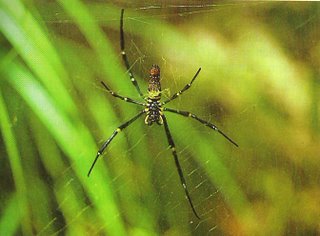 A zoologist named Joseph Koh nickanamed Mr Singapore Spiderman wrote in "A Guide to Common Singapore Spiders" about the Rolled-Leaf Comb-Footed Spider with the Latin name of Acaearanea mundulum that hides in a leaf retreat suspended in the centre of the web and that the leaf is collected by the spider and carried into the web. It is fastened with silk threads at one end to form a tubular hiding place for the spider itself, and for its pink and spherical egg-sacs. Another is about a Scarlet Acusilas (Acusilas coccineus) which hides in a retreat made of a rolled leaf suspended in the centre of the web. Interesting. Our multi-legged arachnid friends seemed to belong to a different world out there.

By the way that same Joseph Koh is now among us in Brunei talking about spiders (of Brunei now) here in his capacity as one of the ASEAN countries ambassadors here. During lunch the other day we talked about His Excellency's passion - a zoologist by training - a diplomat by profession - about our eight legged fellow Bruneians - spiders. All of us have come across spiders before, some huge ones, some hairy ones, some brown, some colourful. The problem is not that many of us know or even bothered to find out about these creatures when we come across them. The most common reaction is that we will get a broom or a slipper or a shoe to hammer these creatures into oblivion.

Other non-Bruneians noticed the spiders much more. The Centre for British Teachers (CfBT) wrote in their website as a guide to expatriate teachers coming to Brunei that spiders and insects make up by far most numerous and diverse group of animals encountered in Brunei. According to them, all spiders are poisonous but very few have mouth parts that are tough enough to penetrate human skin. There are no spiders here that can kill but there are some that could give a nasty bite if handled. The commonest household spider is the Huntsman; it is pale brown in colour and the female is easily identified by the large, circular egg case which it carries slung beneath its body. It doesn't build a web but hunts its prey. It can grow quite large, up to about 4" across but they always run away if threatened. Okay. Hands up to those who knew the bit about all Brunei spiders being poisonous but cannot kill and how many even knew that we have one local spider which hunts prey instead of catching them from webs.

Unfortunately as far as I know, I could be wrong, other than that paragraph in CfBT, no one else seemed to have done anything much or let alone do an arachnology study or even to writing a guide book about spiders here in Brunei. So our zoologist diplomat spiderman has kindly embarked on one. He is now working with the local authorities on the spiders of Brunei in his spare time in pursuit of his passion. Unfortunately I am not able to publish anything yet as the work has just started. It would be very interesting to see the end result.

What gets me is that is is always someone from outside Brunei who noticed what we have. We seemed to have a very rich biodiversity which we all acknowledged and even brag about. I came across a website which has this paragraph which one Richard Seaman wrote ".. Brunei has some of the best preserved rainforest on the island of Borneo, not because they're fervent environmentalists, but because they're so rich with offshore oil wealth that they haven't bothered destroying their forests .." I guess if we have it, whether we are fervent environmentalists or otherwise, no matter how it was achieved, we might as well make something out of it.
PS. Just after I finished writing the above, I sat down to have a look at the book which I wanted to blog in the future entitled "Belalong: A Tropical Rainforest" written by Earl of Cranbook and David Edwards, and guess what? It has pages and pages of Brunei spiders in Belalong! This included the large 'bird eating' spiders to the wolf spiders to spiders that mimic species of ants with such accuracy that even the trained observer can be deceived. The photo credit for today's entry of the orb-web spinning spider Nephila belongs to the authors of the book.

Anonymous said…
haha. now i will never be able to kill the brunei spiders without first knowing what i am killing!
Thursday, November 09, 2006 7:13:00 AM

Anonymous said…
Years back when a group of us went to the Belalong Outbound, a friend of mine came back home to bandar and found a LARGE dead colourful spider in her bag. *eeeiii* imagine if it was still alive. *panic attack* for me that is.
Thursday, November 09, 2006 11:36:00 AM