Another History of Brunei: Our Neighbour's Perspective 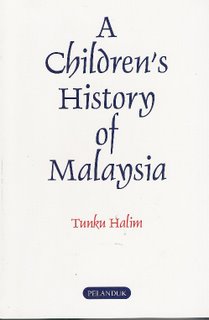 I was trawling around Booker International during lunchtime on Monday. I really missed having a good bookshop in Brunei. I asked most of the bookshops why their selections are so poor, the answer was they don't get many buyers for even some of the books they bring in. Other than Solitude which has a very nice collection of Islamic and contemporary Arabic books and Best Eastern which has some good titles, it is still Booker International which has the more serious stuff. Unfortunately I don't go there often enough either. I do my book shopping on the internet which is either Amazon.com or Barnes and Nobel, bn.com.

During that trip, I found and bought a few good books but I thought I will focus on one which is actually a children's book entitled "A Children's History of Malaysia" written by Tunku Halim (B$11, 278 pages). The back cover of the book listed down a list of nine questions that you can find answers to in the book such as 'Who founded the Melaka Empire', 'Who started the state of Perlis' etc. But the 8th question was intriguing - 'Why is Brunei not part of Malaysia?' So I bought the book and started reading it last night.

It's a nice read (it is a children's book afterall) and it actually started off with the legend of Bukit Seguntang when three princes who proclaimed themselves as descendants of Alexander the Great magically appeared. One later moved into Minangkabau to become the King, another went to become King of Tanjong Pura and the last one, Sri Tri Buana stayed on as King of Palembang. Parameswara was said to be descended from Sri Tri Buana. Parameswara founded Singapore and later moved on Malacca. The stories of all the other states in Malaysia are included in the book including both Sarawak and Sabah which used to be part of Brunei.

The book stated that Brunei's wealth in the 16th century came because many Muslim traders fled Malacca when the Portuguese attacked Malacca and started trading in Brunei instead. However Sulu then took over most of the trade and with the declining wealth, the power of the Sultan also declined and hence the need to ask for Brooke to help protect Sarawak and - eventually lost Sarawak as well. Similarly with Sabah, the land was 'bought' over by the American, Moses before being taken over by Overbeck and later by the British. Overbeck was said to have paid for Sabah twice - from the sultan of Brunei and also from the sultan of Sulu. The other chapter described how Brunei refused to join Malaysia - something along the line of not wanting to share the oil revenue as well as the insistence to be the first ruler.

I have read a number of other history books as well and the problem with history books is that if you are a writer, you will write it from your point of view and very seldom do you write it as a third person - the victor writes the history. I have to admit that this particular book does make me feel a little bit sensitive to have young Malaysian children reading it and thinking about Brunei in the way it was described. Granted, it is a children's book and it can't be analytical at all given the size of the book and the language used and the usual problem with writing about anything especially history - it will never be pleasing to everyone who reads it. One tend to be 'nationalistic' about it no matter how true or not true it is. But I would still recommend anyone to get the book as it is about the only book that I know simplifies the entire Malaysian history right from Sri Buana all the way to the Confrontation with Sukarno and much more and - of course in a nutshell how Sarawak and Sabah was lost and why we are an independent oil rich nation without having to share our revenues.

Anonymous said…
"The other chapter described how Brunei refused to join Malaysia - something along the line of not wanting to share the oil revenue as well as the insistence to be the first ruler."

Anonymous said…
Well, what I learned last year in Hist class was that Brunei refused to join Malaysia was because Brunei would loose its wealth to other rulers and it would take about 50 years at that time for the Sultan of Brunei to rule the whole country. So, thats what the government taught us.
Thursday, November 02, 2006 9:49:00 PM

Anonymous said…
As you said it, history was written by the winners and the viewpoint of the author. That's true. But to teach such viewpoints to the youngsters is a bit too much.
Thursday, November 02, 2006 11:01:00 PM

Anonymous said…
what Al-Marhum did for not joining with M'sia was the best tactical move ever made by Brunei. I wouldnt want to see Brunei like Sarawak and Sabah. Despite being the resource rich states of M'sia remain the poorest!
Thursday, November 02, 2006 11:14:00 PM

2- History: There are 2 types of sejarah ani, i: written, ii: oral. I'd rather stick with oral traditions for some bit. I asked my dad some parts of Brunei history once, I asked him, "Cana kita tau?" He replied, "Aku idup bila kan mun nda time atu?" hehe silly me asking stupid questions. Although kadang2 we can only berpuas hati with what is written and not hidup when it happened...bla bla bla
Thursday, November 02, 2006 11:23:00 PM

2- History: 2 types of sejarah yg ku tepkir time ani, i: written, ii: oral. I'd rather stick with oral traditions for some bit. I asked my dad some parts of Brunei history once, I asked him, "Cana kita tau?" He replied, "Aku idup bila kan mun nda time atu?" hehe silly me asking stupid questions. Although kadang2 we can only berpuas hati with what is written and not hidup when it happened...bla bla blald
Thursday, November 02, 2006 11:24:00 PM

Anonymous said…
Thank you for reviewing my book.

As you say, history is written by the victors. Happily though, in this case there was no war! The info in 'A Children's History of Malaysia', including the chapters on Borneo, comes from respected text books. I don't know of any other conflicting reason why Brunei didn't join Malaysia. In fact not wanting to share the wealth in itself is a very good reason.

I hope you're enjoyed the book. My aim is to teach children history without boring them. History is about real stories, things that really happened.
Tuesday, February 20, 2007 12:14:00 PM