The Wild - Sequel to Madagascar? 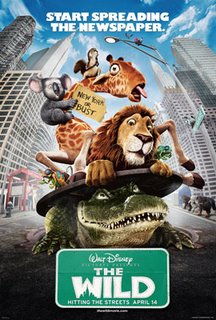 I took my wife and 6 year old son to watch 'The Wild' at the Mall yesterday. It's a story about zoo animals going to the wild. It has a lion and a giraffe as its main characters and they go on this boat with a bunch of other animals to an island in Africa. Sounds familiar? Yup, it's exactly like 'Madagascar'. For anyone who has not watched it but has watched 'Magadascar', save your dosh. It ain't worth it. But then, what do I know. Go and spend your $6 and find out for yourself.

The other thing I don't like about watching that movie was not the movie itself. The subtitles in Malay and Chinese were huge. I have been noticing that of movies on Brunei screens. Do we really need them? And with the technologies available to us, why do these subtitles look just like they were with the 1950s movies? I don't know about the chinese subtitles but the Malay one was terrible. I think whoever is the distributor might as well as save your money doing subtitles. I don't think it works.

Anyway, that was the first time since the outbreak of HFMD that we actually went out. I think the last time I went to the mall as a family must have been last January. We noticed a number of tenants have changed hands and the amusement center is finally open. The Dixy Chicken franchise seems to be running into a little trouble. The advert has been up for months now. The ice skating rink is empty. I was wondering whether it is working or whether we Bruneians have grown tired of it. We do need a large population to get some of these things going, I tell you. After a couple of blogs about empty shops at other shopping centers, I am glad to say that it is still business as usual at the mall.

Talking about movies, I was surprised HBO was showing Constantine last night. I remembered last year I had to watch it in a cinema in Brisbane as we did not allow it to be screened in Brunei. Even now, you still cannot get the DVD or VCD of that movie. I was wondering whether my ex-regulatory colleagues did not realise it or whether they are more liberal nowadays. I don't know about you all. Personally I found the movie a bit difficult to follow and I doubt that a lot of people would find the movie that easy either. The concept behind it was a little bit 'advanced' if I may use the word.

Anonymous said…
Ironically I watched "Constantine" last night too. I guess I can understand why it was banned in Brunei but it still doesn't excuse the movie from being a snore and a half. I think "Hellboy" (renamed to "Super Sapiens" in Malaysia") was also banned from being shown in cinemas but was also aired on HBO.

And as for "The Wild", it was produced by Disney and can't really be the sequel to "Madagascar" which was produced by DreamWorks (the guys who brought us "Shrek"). Still, there are some uncanny similarities between the movies released by both companies:

- Monster's Inc & the 2 Shrek movies: the heroes are monsters

- The Wild & Over the Hedge (and not to mention Madagascar): movies involving animals. You can even throw Chicken Little into this pile.