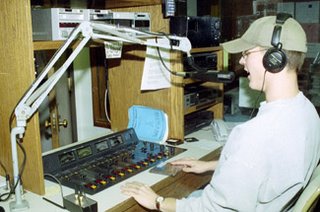 My agency is preparing its corporate video and I was having a discussion with the filming house that was preparing it. As usual, there was a national broadcasting agency's person with them moonlighting as their script writer. I have always wondered just how many of them moonlight, you see quite a number of them filming weddings etc. I used to moonlight too at the broadcasting agency many years ago as an English radio newsreader in the early 1990s.

In my days, the pay was not that great. They paid me $20 for one session. Admittedly that was only for about 15 to 20 minutes of reading the news. But that did not take into account the 1 hour that I have to be there earlier checking the news and also making sure that the editing is up to scratch (plus a few weeks of unpaid training time). I can assure you that sometimes I was embarrased to read the news out loud as the grammar was all funny. I studied English Literature up to A Level, so I would say my English was slightly advanced compared to most. Being a government officer, I also know when their facts are slightly off too. So, it does take that 1 hour to make sure of the English, the facts and to get the reading intonation correct. So it's not just a matter of going to the studio, switch on the mike and start reading.

The newsroom and the studio then were in different buildings. For the 7.15 am news or 9.15 pm news, it was not much of a problem. All the news gathering and editing would have been over hours before and I just collected the script from the newsroom and walked over to the studio. But when there is a late breaking news or the 12.30 noon news, I normally had to wait in the newsroom fidgeting as the editors would sometime take until about a couple of minutes before the news before finalising the newsscript. Then I had to run all the way to the studio. Many a time, I have been completely breathless when I switched on the microphone. Nowadays the studio is in the newsroom itself.

Unfortunately I was not able to go on the television news. By my third year, I was already doing the tv news dry run. Before each news delivered live, there is always a dry run, an exact replica of the live news. So I used to be the person doing it and the actual newsreader would do it live. I did this for a few times as the editors were giving me time to familiarise myself before putting me on live. But by then I was already into my first year of marriage and I was then appointed as the deputy to run the newly created retirement fund agency, and my time was severely limited. And I guess the glamour of being in the public eye was waning. I decided to quit. The editors wanted me to stay on but I had no intention of newsreading as a career. I have often wondered where my career would have taken me had I been a national television newscaster.

The question many people asked me is how to get on the radio. It's not that difficult really. Ask the studio if you can get a voice test and they will test you by giving you something to read. Don't worry about sounding polished - they will train you to do that. What's important is whether you have a 'radio' voice. If you listen carefully to all the announcers and the newsreaders on the radio, you need to have that kind of voice. If you don't have it, then you don't have it. You can't force it. It's nature. However, the one important thing is you must stop swearing. If you make a mistake during the voice test, never say any of the forbidden swear words. You may have the most beautiful voice in the world, but no way that the management will put you on live if they know you have a tendency to curse or swear.