October 03, 2008
When I got to one of my brother in law's house yesterday for Hari Raya, he started talking about the SOAS Mosque and taking out pieces of paper to draw maps and diagrams. Apparently he was a little bit upset about the special documentary on SOAS Mosque by RTB. He said that they did not interview the right people and that the information given was inaccurate. He gave me information not only about the mosque area but about the entire neighbourhood as well.

I did not watch the entire special documentary as it was a little bit boring and it did not tell me anything new. I have read and knew more than what was in the docmentary. I knew the bit that my brother in law wanted to correct. On the site of the SOAS Mosque was actually a sawmill run by someone called Si Pinggang. The entire area was full of businesses cutting and sawing wood. In the documentary, it was said that the site was full of abuk kayu or wood chips but without mentioning any sawmill. It was full of wood chips as by the time the mosque was going to be built, the sawmill had to be moved.

The sawmill provided planks for the entire Kampong Ayer. The wood or tree trunks were brought in through the river from Limbang. So wood trunks would be floating on the water and brought onshore to the sawmill. It was a big business and everyone who lived in the area at that time knows the sawmill.

When I got home last night, I went through my books collection. I knew I have a photo of the Kampong Ayer area when SOAS Mosque was not yet built. I found it in a 1953 Annual Report of Brunei. This is the SOAS Mosque area taken around 1952:- 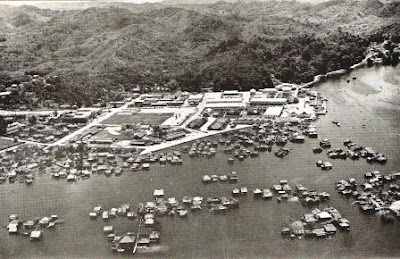 I didn't get to watch RTB so much these days, BRo, but I did manage to congratulate your senior S'pore schoolboy, Cikgu Hj Mahrub bin Hj Murni on his recent appointment as the new Director of Radio Television Brunei over the phone the other day. I am fully confident that if anyone can 'turn around' RTB a full 360 degrees, he's my man, BRo! ;) ASTRO eat your heart out! hehehhe:)Well, it can be a real tall order for RTB to compete with other channels for viewerships even in our own home ground! But with a little bit of ingenuity, creativity, innovative determination and 'political' will power, you never know, won't you? "Alum cuba, alum tau" (You won't know unless you give it a shot). BRo was in RTB for quite sometime 'trouble-shooting' its Admin, so you have some insights.

I haven't seen the TV documentary on Masjid SOAS but if I were the producer or director of that programme, I would have tried to get hold of the actual Architect of our 'iconic symbol of Islam' who is still pretty much alive and kicking. He has in his possession still one of only three original replicas of the mosque's small-scale model. The main original model is being kept by the Royal Palace since the Late Almarhum Sultan Haji Omar Ali Saifuddien was the conceptual designer of that Masterpiece landmark! The other model, probably was held by the Principal architect (an expatriate European guy then).

This is what is still very much lacking amongst current younger generation of reporters both in the local electronic and print journalism field -- research and indepth analysis of stories they are supposed to gather in order to inform the public much better!:(
Saturday, October 04, 2008 1:56:00 AM