October 30, 2008
[My article below was published in its usual Golden Legacy column in Brunei Times Sunday Edition, last Sunday.]

ONE of Brunei Darussalam's iconic structures recently celebrated its silver jubilee anniversary, though the event went by without any official celebration. The Hassanal Bolkiah National Stadium was officially opened on 23rd September 1983, exactly twenty five years ago.

Not many remembered that the date chosen for the official opening of the stadium was to commemorate His Majesty Sultan Haji Omar 'Ali Saifuddien's (then His Royal Highness Paduka Seri Begawan Sultan) 70th Birthday. It was His Majesty who had initiated the project eleven years before that. The construction of the stadium, then considered the most modern in the region was one of the most memorable events for the people of Brunei Darussalam.

Everyone was excited about having a national stadium that a fund was set up to allow Bruneians to contribute towards the cost of building the stadium. Unusually for a public building in Brunei Darussalam, members of the public donated and contributed towards the building of the stadium. Although the final collection of $1,102,761.57 accounted for a little more than 1.1 per cent of the total building cost ($100 million), the public participation showed the Bruneians' great interest and support for this project. According to a book about the stadium specially issued during the Merdeka Games of 1985, the original idea to build the stadium came from His Royal Highness Paduka Seri Begawan Sultan Haji Omar Ali Saifuddien Sa'adul Khairi Waddien. It was to commemorate the Royal Visit of Her Majesty Queen Elizabeth II to Brunei on 29th February 1972. The Royal Visit became an important event to commemorate the strengthening of an excellent and friendly relationship between Brunei Darussalam and the United Kingdom which had existed since 1847.

The National Stadium is located on a 70-acre site off Jalan Berakas. The construction works were carried out in various phases including Earthworks which commenced in August 1980. The main building construction works commenced in January 1981. The Stadium was finally completed in July 1983. The Architect for the project was SAA Partnership; the Civil and Structure Engineers were Bolton Hennessey Pte Ltd (Earthworks and Phase I Substructure) and PWD Structural Section (Phase II Superstructure); the M&E Engineers were Leong Consulting Engineers; the Quantity Surveyors were Contractor Services Consultants; the Main Contractor was Swee Pte Ltd; the Scoreboard Contractor was General Electric Co of Singapore Ltd; the Landscaping Contractor was Pyramid Construction Ltd; and the Synthetic Track was Maju Jaya Pte Ltd/Voight and a number of smaller subcontractors.

The entire project cost for the stadium is about $100 million. When it was first completed, the stadium can hold 30,000 spectators including 110 royal seats, 550 VIP seats and 3,000 grandstand seats. The stadium internal road system is linked to Jalan Berakas and to the Jalan Delima Berakas. Parking spaces are provided for 2,785 cars and 158 buses. The public enters the Stadium through four main points on the first floor concourse level which segregates the public from the ground floor level.

The stadium is orientated on a north-south axis so that the participants are not affected by the sun. The grandstand is similarly located on the west to avoid the afternoon sun. The stadium is 850 feet long and 632 feet wide. The height of the flood light towers is 198 feet. The aluminium sheet finish roof is 198 feet high and 135 feet long and cantilevers 59 feet beyond to cover the grandstand seats. One round of the top tier spectator seats is 2,368 feet which is about half a mile long. The stadium was officially completed on July 31, 1983, when the architect officially handed it over to the Public Works Department who in turn handed it to the Welfare, Youth and Sports Department (now the Youth and Sports Department) for its management and maintenance. With the date of the official opening less than two months away from the handing over date, the Welfare Youth and Sports Department faced a great and momentous task in preparing for the official opening ceremony. Despite that, they were able to complete the preparation. 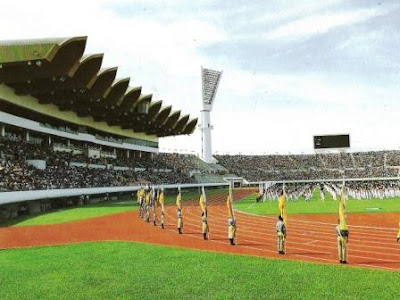 On the day of the opening, thousands of students and other participants performed a massive display on the field making the first of its kind to be performed in Brunei. To get that display, two helicopters were deployed. The days before the opening ceremony, the sky opened up and drenched the field. It took two helicopters flying about six feet above the field to help disperse the water from pools on the field. This was certainly an expensive way of drying the field but nothing was going to stop the massive display. Surprisingly too, on that afternoon, the sky was clear and allowed the display to go ahead. More than 35,000 people turned up to watch the official opening of the Stadium. His Majesty Sultan Haji Hassanal Bolkiah Mu'izzaddin Waddaulah consented to officially open the stadium and named it Hassanal Bolkiah National Stadium. More than 3,000 balloons were released during the massive display. In the evening, a friendly football match was played between the Brunei Darussalam national team and an invited English League team, Sheffield United. This was the first football match played in the stadium. Despite the jet lag and the humid weather, Sheffield United won 1-0. The next day another match was held between Sheffield United and a Brunei invited team which ended in a 1-1 draw.

Since then, the stadium had undergone renovations. One of the more visible one was the construction of the Royal Dais in 1992 in time for the first major tattoo display in Brunei. The Royal Dais required the building of a second layer of roof over the stadium. In 1999 during the preparation of the Southeast Asian Games (SEA Games), that roof was removed. The electronic score board was also replaced to a more modern one. The seats too had been upgraded. Brunei Darussalam celebrated many national events at the Stadium including the first ever National Day celebrations. The first National Day on February 23, 1984, was celebrated at the stadium. Students and youths performed their displays on the field in front of the huge crowd at the Stadium. There were more than 10,000 students holding coloured umbrellas and flip cards to display various slogans. 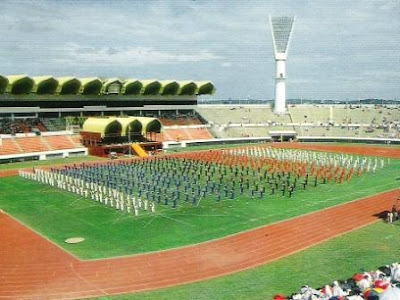 [The Stadium after 1992 renovation to include a Royal Dais with a rooftop. The rooftop was removed in 1999]

That first national day was marked with 1,984 balloons and 1,404 pigeons being released to mark both the Common Era and Hijra calendars. The first few National Days were held at the stadium before the celebrations were moved to the Taman Sultan Omar Ali Saifuddien at the capital. The Stadium also witnessed Brunei Darussalam successfully hosting the 20th SEA Games in 1999, her first ever hosting of the SEA Games. The stadium also saw many Malaysia Cup matches being played on its field since 1984 with the greatest crowds during the run up to Brunei Darussalam winning its first ever Malaysia Cup also in 1999. Brunei Darussalam's Silver Jubilee Anniversary for the National Day will be celebrated at the Hassanal Bolkiah National Stadium in the evening of 23rd February 2009. This will be another great spectacle which members of the Brunei public will be clamouring to watch in the next few months.

Gembo said…
Salam,
I remember being there with parents, grandparents and siblings )was only 9 years old then!). Now I know why they are so proud of the stadium - they help 'built ' it. Thanks for such a great post.

Rozi said…
I remembered participating in that whole display thing when I was a kid for national day, army trucks would pick us up from school early dawn to bring us to the stadium. Each student was assigned a number and we would have to pick up our bit of painted plywood board just before we head to our places opposite the grandstand and it was wooden benches during those time. I never knew what picture we made up to be but I can still remember my board was blue and wondered why not red because I wanted that colour instead, heh... one of the national days between 84 to 87 if I'm not misaken.
Monday, November 03, 2008 1:40:00 AM

Deafening Silence said…
The morning sun shone brightly to the attendees sitting at the grandstand during the early hours of the first National Day on 23rd February 1984. They had to cover their faces with the programme books to avoid the blazing sunlight. I was sitting with my schoolmates with poms-poms at the other side of the stadium getting ready for the ceremony. We were glad to have shades those time around even though not for long after. Now,like others, I am so glad to be there and be part of history, in a small way.
Monday, November 03, 2008 10:48:00 PM