October 12, 2008
Not many realised that last week was Bandar Seri Begawan's 38th Anniversary. It was on 4th October 1970 when His Majesty consented to declare what was then Bandar Brunei or Brunei Town or even some called Pekan Brunei as the new Bandar Seri Begawan. 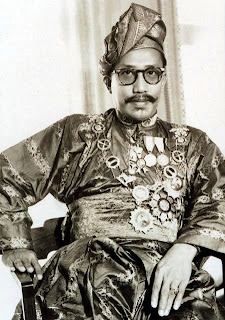 Even today not many knew where Bandar Seri Begawan came from. For the younger readers, Seri Begawan Sultan was the title used by His Majesty's father, Sultan Haji Omar Ali Saifuddien when he abdicated in 1967. Begawan is an honorific title used in Brunei to denote that person has retired. It is in honour of Sultan Omar Ali Saifuddien was the reason why the name of Brunei's capital city was changed.

His Majesty Sultan Haji Omar Ali Saifuddien was known as the Architect of Brunei. I have always taken that for granted. But over the last few years after reading books and articles did I realise personally just how much he has contributed. You would have to start at the beginning just after the second world war.

Despite the first British Resident McArthur’s efforts to move the ‘Bruneis’ to dry land in 1906, not much progress was made. In December 1941, 35 years after McArthur’s efforts, the dry land in Brunei Town was merely a small town with one major road going through it with all the houses made out of wood with nipah roof and one cinema built in 1923 made out of wood for night entertainment. There was a wooden mosque named Masjid Marbut Pak Tunggal, sited not far from today’s Sultan Omar Ali Saifuddien mosque. Other than that, there was not much. Even that small development was wiped out by the end of Second World War.

It was Sultan Haji Omar Ali Saifuddien who worked hard to bring development to the capital city from a ruined city after the end of the Second World War. At the end of the war, after heavy aerial bombardment by the Allied Forces, Brunei Town lay in ruins. Even that wooden mosque was destroyed.

According to TS Monks, one of the first British administrators who came immediately after the war, described Brunei Town as ‘… hardly a building left standing … the main street was a mess of bomb craters and fallen telegraph poles … there was not a soul in sight anywhere … it was a shattered ghost town … so severe had been the bombing damage that it was difficult to imagine what the town had been like …”

It was Sultan Omar Ali who introduced the modern government and including all the various national development plans. It was then that Brunei's capital city took the shape it is in today. By 1970, Bandar Seri Begawan was deservedly named.