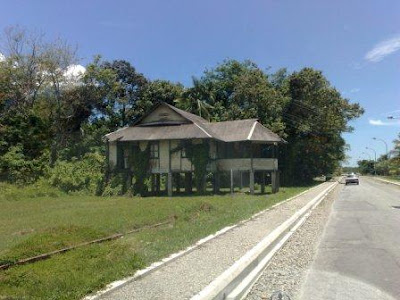 At the beginning of the 20th century, many Bruneians have forgotten that it was not oil that sustained us. It was coal, rubber and cutch. I wrote about cutch in my Brunei Times' Golden Legacy column last week. Yesterday I wrote about rubber. But I couldn't get the photograph I wanted to place in the newspaper. Instead it was an old photograph about Labu Estate in Temburong.

The photographs I wanted were these ones here. Many people pass by these two places without realising what these are. This house is located at the simpang, I could not remember the name of the road but it is just off the road that one uses to go through to ISB in Berakas. This house and the rubber factory in front of it are clearly visible whenever one passed by the area.

The house belonged to the Manager of the Berakas Rubber estate. Berakas, remember, used to be a major rubber plantation. In fact, around the Lambak area, I remembered in the 1960s and 1970s many rubber trees remained. 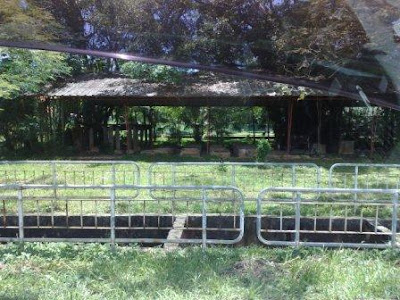 Ms. Fawlty said…
I was born in that house in 79! My grandfather, the late Hj. Awg. Chuchu b Awg Yakub worked at the plantation & our family lived there for quite sometime. I don't remember much about that house except that there used to be a small fridge with big Mirinda orange stickers. Someone took it away long ago. I think the rambutan tree still exists. We moved in the 80s which inspired a post that I sent you a long time ago.
Friday, May 02, 2008 1:00:00 AM

Jewelle said…
And I was told that the area where the Scouts building is right now in Beribi used to be a rubber plantation too in the 80s. And my husband who was a Scouts then camped there once.
Friday, May 02, 2008 4:43:00 PM

View from NY said…
Right up to the 1980s, the whole of the Kiarong and Kiulap areas were covered by a rubber estate. Let me share a story from my childhood (not that I am that old!)
I remember going on 'adventure' car trips with my father. From the old drive way to RIPAS Hospital (which used to have a direct entrace from Jalan Tutong roughly where the highway overpass currently is) we would snake through the village roads and eventually come upon a wonderful stretch where the rubber trees grew so dense that the branches meet across the road and form a 'tunnel' for us to drive through. Eventually, we would emerge in the Mata Mata area where the PTE (Pusat Tingkatan Enam now knows as Maktab Duli) was under construction.
The year was probably 1979/80 because RIPAS and PTE were both still under construction; if I am not mistaken, they were opened in 1982 and 1980 respectively. Later, due to the construction of the Lebuh Raya Sultan Hassanal many of the trees began to die probably from poor drainage; but of course, with development in the area the estate was gone.
Until recently, one can still see some rubber trees near the airport roundabout but that too is going..going..gone to development.
KH
Monday, June 30, 2008 10:41:00 AM