The Origin of the Brunei's Kopiah

February 17, 2008
[Note: I wrote this for Brunei Times 23rd September 2007 publication. It was the fasting month and I had trouble writing about fasting and related matters in those 4 weeks. This was written out of sheer desperation and I had trouble compiling the materials. What surprised me most was to discover that the topi haji, the tarbus and the Brunei's kopiah are all the same origin.] 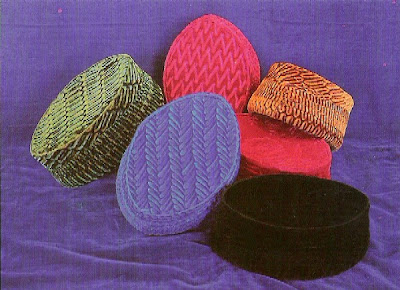 DURING this fasting month, many Bruneians will be going out to buy new clothes to celebrate the upcoming Eid ul Fitr, the month of celebration after a whole month of fasting. In Brunei, not just for the ladies but for the gentlemen too, they have to get the whole ensemble — from top to bottom. That means including buying their traditional headgear — the Songkok or the Kopiah as it is called in Brunei.

However, to describe what a songkok looks like to someone who has never seen one is actually quite hard. The closest that one can do would be to describe songkok as a type of oval brimless hat, resembling a skull hat or skull cover.

Songkok is an interesting headgear for Bruneians and many in the region. Wearing a headcover has always been part of the Bruneians' old tradition. No one knows when it first started. In the past, it was used to tell society one's social strata or place in life. Today, everyone uses a songkok. It has become a symbol of being a Malay or a Bruneian.

Before the songkok, Bruneian males would be wearing a dastar or a tanjak. A dastar is a traditional Malay headcover made of cloth or thick fabrics where the knot or the fold moves upwards to the top and curls slightly sideways and tied around the head.

Many depictions of ancient Malays would show the men wearing a dastar. Nowadays it is generally worn only by the groom during weddings and by nobility during formal or special public ceremonies at the Istana. Sometimes it is also worn in coming of age celebrations and on other special occasions. However, generally, the dastar is not worn as much as it used to be and it remains the adornment of high palace officials at the palace courts.

With the coming of Islam, introduced to Bruneians by Arab traders — some of whom doubled as Islamic missionaries — more than six or seven hundred years ago, the popularity of headcovers must have redoubled.

This was quite logical because the religion encourages its followers to cover their heads. In fact it is considered "sunnat" (a voluntary good deed) for Muslim males to put on a headcover as long as it is done appropriately.

Originally it was the serbans or turbans which were also very much in evidence at about the same time. However, turbans were seen more as something that was worn by the Islamic scholars or ulamas rather than by ordinary people.

For the ordinary folks, something else caught on — the songkok. According to experts, the songkok became a familiar sight in the Malay archipelago around the 13th century when Islam began to take roots in the region.

While the origin of turbans never made any doubt, much speculation has arisen about the songkok simply because it is no longer seen among the Arabs. Even though in some Islamic countries, something similar to the songkok became quite popular.

In Turkey, there is the fez and an almost similar one called tarboosh in Egypt. The fez originated from Ancient Greece and was adopted by the Ottoman Turks.

Originally a long turban would be wound around the fez but, over time, the turban was dropped and only the fez remained. The fez was originally rounder but became harder and longer. In Turkey, it became red.

In South Asia — India, Pakistan and Bangladesh — the fez was known as the Roman Cap or Rumi Topi. It became a symbol of Islamic identity and showed the support of Indian Muslims for the Caliphate headed by the Ottoman Empire.

According to some experts, this is the same headgear which is the predecessor to the songkoks in the Southeast Asian Archipelago.

What could have happened is that the Malay craftsmen of that period must have started to modify the original hat, which was somewhat round, and came out with a slightly oblong shape with a horizontal or flat top.

Their creation served as the model for the Malay songkok makers that followed and survived to this day. A number of modifications were made along the way. These included sewing pieces of paper between the linings, which are made of satin to make it sturdier. The songkok itself was made out of black felt.

Today the main ingredients of a songkok are cardboard, velvet and stain. The cardboard has replaced the old method of using pieces of paper as stiffener. When all the parts are sewn they are then assembled and knitted according to the shape, height and head size required before the velvet is stitched on.

Songkoks were also known as Peci in Indonesia. Like the songkok, peci is black with a more ellipse shape and sometimes decorated.

After a period of time the wearing of songkok became a tradition and synonymous with being a Malay. It became the symbol of a Malay. Over time it replaced the dastar as part of the Malay's national dress on most formal occasions.

Today, like other gears, the songkok comes in many colourful variations to suit individual tastes and styles.

The more common ones are the black flat top. This can be bought ready made or it can be custom made if one wants a different felt or material.

There are those who prefer other shades of colour such as purple but nowadays this is not normally done. Yet a number of organisations do wear differently coloured songkoks, like blue for the Marine Department officers.

Some prefer their songkoks with slightly raised sides or in Brunei Malay called "bergunung" ("mountainous"). This type of songkok will no longer have a flat top.

Some prefer their songkoks with laces or with some decorations along the sides of the songkoks or in Brunei Malay called "berlis" ("with laces").

Some combined the two making the songkoks much heavier than normal.

Nowadays there are those who prefer their songkoks "berkalimah" (literally, with ayat on top) — usually the name of Allah written on top of the songkok.

In addition, there are songkoks without the stiffener and can therefore be folded up or flattened.

In the 1960s, the songkok could be worn tilted to one side (in Malay called senget). This style was very popular in those days but seldom found today.

The art of songkok-making has been taken up in Brunei through the Brunei Arts and Handicrafts Training Centre which was set up in 1975 where young school leavers learn from master craftsmen. Today, a small cottage industry exists for the making of songkoks

Anonymous said…
Dear Rozan,
Just to share an experience in my younger days of wearing a songkok in UK. It was worn as part of a military uniform and the Brits funnily called it a pillar box hat. Much later I realised they also termed the French Army's headgears the same (with brims). here you go, you can now describe our kopiah to others as a hat resembling a pillar box.I hope this is of some use.
Sunday, February 17, 2008 10:51:00 AM