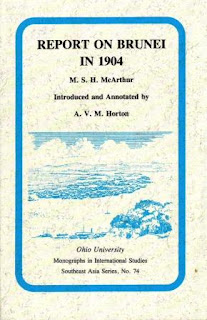 In 1904, the British Government sent one officer, Malcolm Steward Hannibal McArthur to Brunei. MSH McArthur was then a British Official in the Malayan Civil Service. He was sent to Brunei, then a British Protectorate, with instructions to study the situation in Brunei and to make recommendations concerning the country's future administration.

This report is a make or break for Brunei. At that point in time, the Rajah Brooke family has made it no secret that they would like to absorb the last bit of 'Brunei' into Sarawak having taking over the Brunei territories of Sarawak since 1841. On the north, North Borneo Company was also expanding southwards towards Brunei proper until it got stopped at Trusan by Sarawak. Brunei as some would describe it was at its nadir. It was at its lowest point in history. Its survival was dependent on the report of one man - MSH McArthur.

McArthur spent six months in Brunei. In that time, he visited Belait and Tutong and Brunei Districts. His report on his visit to Belait and Tutong Rivers was dated 14th July 1904 and his report on Brunei was dated 5th December 1904. When the reports arrived in London in early in 1905, it was greeted with unanimous approbation and considered as the best report ever written and very useful. He was able to honestly report the real attitudes of the Brunei people despite Rajah Brooke's efforts to discredit him. As a result of his report, the British government decided to underwrite the separate existence of Brunei, thus giving reprieve to Brunei. Even though I am too proud to say we owe our existence to this man, it is no doubt that this report played an important part to the survival of Brunei as a nation.

This document is the most important document in the history of Brunei. It was republished by the Ohio University Center for International Studies Center for Southeast Asian Studies and printed in 1987. It is still available on Amazon and the copy that I have, I bought as recently as last year. I would suggest you all read it and the lesson is that we should NEVER let our beloved Brunei be in that situation again.

ROGUE ECONOMIST said…
My husband always says that for what Mc Arthur did, he only got a road named after him hehe
Saturday, February 16, 2008 5:24:00 PM

Rozan Yunos said…
Yea, poor fella. He did so much. He was also the first British Resident. He created the modern administration we inherited. He moved the capital on land.
Saturday, February 16, 2008 7:11:00 PM

ROGUE ECONOMIST said…
I know! My husband and I were talking about him just a few days ago and he also pointed the exact same points you're saying. Anyway thanks for the info. Will also look for the report in amazon later.
Saturday, February 16, 2008 7:32:00 PM

FlyBoy said…
Mr MacArthur's honest report on the situation in Brunei back then was a turning point in our survival.

We were broke, in debt and had the big bad Rajah ready to devour us. Mr MacArthur played a role in Brunei's rise from the ashes but it is with Allah's Will that has us where we are today, Alhamdulilah :)
Monday, February 18, 2008 10:17:00 PM

Anonymous said…
Why are you talking bad about my great uncle,MacArthur?.He did a lots of contribution to Brunei.