Surprises at the MIB Forum 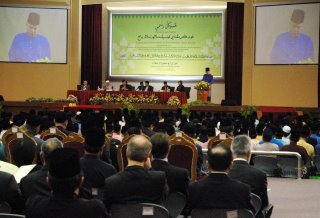 The MIB forum organised by the titled persons of Brunei for His Majesty a couple of nights ago was interesting in many ways. I know many of you who were not at the UBD Chancellor's Hall think that you have already seen one MIB Conference, this one would be just like that. Surprisingly, no. There were a few things that I found very interesting despite the forum ending at about 12.10 am.

The first was to see a real life Prince, the Crown Prince of Perak talked about the institution of the monarchy. He is a scholar having his first degree from Oxford and his Masters and PhD from Harvard. I met him when I was there and he was a down to earth man. I remembered he introduced himself as Nazrin when I met him in Cambridge about 10 years ago (Cambridge is the name of the town in Massachussetts where Harvard University is located - the name is copied from the Cambridge in UK) and he refused to have any sort of formality. During the MIB conference, he delivered his paper with panache with a very scholarly attitude and his speech and language .... man, I wish I can write and speak like that.

The content itself was interesting and to any ruling royals in the world, very 'insaf'ing, if there is such a word - you can only rule if the public let you and when you rule, you have to rule well. He said that at the begining of the 15th century, there were some 300 ruling dynasties and by the end of the 2nd world war, we were down to a handful. Most have disappeared along the way. Those that survived adapted and basically ruled well to remain in existence. It was a paper that could only be written and said by a prince to his fellow princes. He shed tears towards the end. The emotion of being allowed to be open and to talk about one's own destiny was at the end of the day, overwhelming. [The full speech is available on the main bruneiresources website.]

The other papers admittedly were run of the mill and very straight to the point as they have been said in the past. They were actually interesting but after more than an hour of listening to the fantastic keynote address by Raja Nazrin, they were really outclassed. Though the Malaysian Professor was interesting in a way but I couldn't remember much of what he said. But for a Chinese Professor, he was able to see it from a non-Malay perspective and for that it was in itself unusual. Judge Hayati gave the normal run of the Constitution and how the royalty was part of that Constitution. However, she was able to attract everyone's attention when she talked, or rather she called out (loudly and clearly), that the time is right for women to be included in the Legislative Council and not just the present 29 all-men LegCo. All the ladies present and men too clapped very loudly. The camera was not unfortunately focused onto the main man, I really wanted to see what his reaction was.

Another surprise awaited for me at the steps of the hall. I was standing next to a Deputy Minister, both of us waiting for our cars to come pick us up, when he said to me something about what you young bloggers are up to nowadays. Apparently he is an avid reader of Brunei blogs. Well, Dato, I am about a dozen years younger, I guess young is relative. To most Bruneian bloggers, I am old. But it is interesting that the Deputy Minister acknowledges the existence of bloggers and so for you young bloggers out there, your serious stuff writings are read by the policy makers. I do know of a few extremely senior people who read my stuffs but on official relationship, I don't talk about it and therefore we pretend I don't write blogs. But you will be surprised who else reads your stuffs. That's an avenue for you to explore.

Anonymous said…
With that thought in mind, I hope the policymakers read the posts I made on the status of the Brunei environment. Did the cameras focus on Prof. Madya Hj Hashim when Judge Hayati mentioned about women? MIB lecturers are notorious for being sexist, I wonder how he reacted to Judge Hayati's statement.
Saturday, September 23, 2006 12:35:00 AM

BRUNEI resources said…
The Prof reiterated the call during the summing up. That will surprise you.
Saturday, September 23, 2006 12:43:00 AM

Anonymous said…
I wonder if public have access to the paper by Raja Nazrin. I would love to read it if its accessible.
Saturday, September 23, 2006 8:44:00 AM

Anonymous said…
Again stressing the need for intellects in the country....only they can have a realistic and charismatic vision about the future of the country....with the right knowledge and intentions of course. Events like those u mentioned and speeches that are becoming non-dogmatic and non-sychophantic are the real deal! Thanks for sharing your experience at the conference Mr Speaker. Raja Nazrin is already a legend in my eyes
Immunologist
Saturday, September 23, 2006 9:56:00 AM

Anonymous said…
Yes, exactly. I was so engrossed in Raja Nazrin's speech and the whole seminar, even the chinese man. It was amazing, never have I known that MIB could be an interesting topic. Well done to the organisers for getting great speakers. I was also wondering where we can access a copy of the conference?
And I must say, Raja Nazrin- impressive! He surely has gained a lot of respect from that.. Now that's what you call a 'Raja'.
God Bless Mr. BR. Hopefully you can help out with finding the resources, hence your name. ;) hehe please and thank you.
OH and selamat berpuasa!
Saturday, September 23, 2006 11:41:00 AM

Anonymous said…
Yes, I do agree with your findings on how well-presented Raja Nazrin's speech was. I've managed to get hold of the text and yes, it makes an excellent read and provide a profounding insight on a Royal's thoughts on the matter. I wonder, is it also possible to get hold of the presentations of the other speakers? They may somewhat appear run of the mill but in retrospect I think maybe perhaps if we were to set aside some time to read the texts, maybe we can appreciate the underlying messages.
Saturday, September 23, 2006 10:21:00 PM

Hamakraminus II said…
The best speaker at a Bruneian national function was a non-Bruneian, follwoed by tons of useless, repetitive drivel.

Anonymous said…
I am definitly officially a fan of raja nazrin after that night, the words he used to open the speech, praising allah...was just so beautiful. I have never taken saster melayu but i imagined those are how malay literature sounded when spoken and used. Complimented later with his thorough and interesting knowledge of the topic.
I wish there are bruneiean royals (leaders) who could be as equivalent as he was.
Sunday, September 24, 2006 8:40:00 PM