September 04, 2006
Hanoi International Airport is very different compared to the one that I used before. It now has aerobridges. The last time, we had to walk down the stairs and across the tarmac. The airport building is far more modern now. This is my fourth visit to Vietnam and the third to Hanoi. The first time was sometime in 1998 when my father was the Ambassador here, the second was an official ASEAN meeting in 2001 and the third visit to Ho Chi Minh was another ASEAN visit in 2003.

I can see that the place has changed dramatically over those years. Some things remained unchanged but some have changed tremendously. Hanoi now has a shopping center which it did not have 10 years ago. Even though the populace still use motorcycles but instead of the kapchai, they are now using the more modern motorcycles. Though the old habit of 3 or 4 to a bike is still there. I was told the record is 6. And yes, they still have the habit of staring and looking you up and down if you are foreigner.

Bruneians have the conception that Vietnam is a backward country. In some sense that is true especially in the rural areas. But looking at Vietnam's overall macroeconomic performance, the country itself has done remarkably well. Growth over the last year has been around 8% and despite the slowdown of garment exports, the country has been able to continue its strong growth. Most Bruneians have not realised that some of Vietnamese products are now in our local market - telur masin (salted eggs) are one of the more prominent ones. The salted eggs that we buy are now from Vietnam. Dragon fruits are another famous Vietnamese exports. I have been told that a very small number of Vietnamese are already working in Brunei and about 30 Vietnamese have graduated from UBD.

Our national airlines also now flies to Ho Chi Minh City. Though I was intrigued by their advertisement where one of them shows the photograph of the Ho Chi Minh Masoleum. This building which houses the interred body of the late Vietnamese leader displayed in a glass case is not in Ho Chi Minh City. It is in Hanoi. So don't be fooled by the RBA advertisements. Vietnam is also a strong exporter of rice. Even though we have not tried Vietnamese rice, this could be a potential alternative source.

Anyway, just some photos I have taken during my ride into Hanoi. 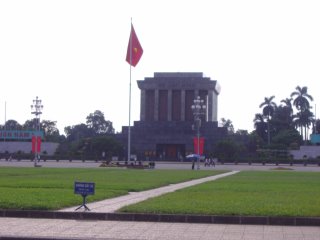 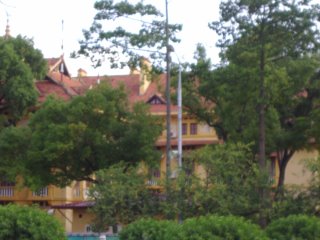 All government buildings in Hanoi are coloured yellow making them easier to distinguish. 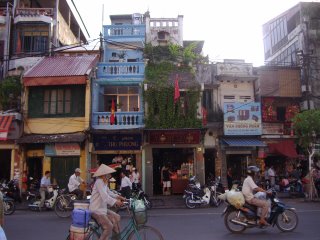 Notice how narrow the shops are - that's the size of the land title for that shop. In some areas, where the owner has become prosperous, that same size width may allow up to about 6 storey building. 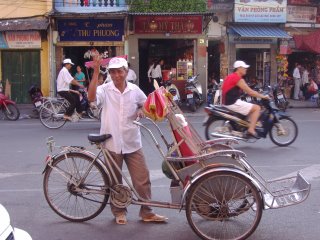 Asking us whether we wanted a ride. 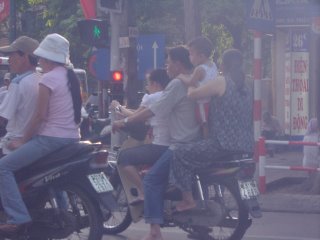 I only saw up to 4 people on a motorbike. I was told that as many as 6 has been seen. Though in one guide book, 25 people can go on the motorbike!

Anonymous said…
I had the opportunity to visit HCM 5 years ago. That was my first window to a country just embracing capitalism. There was only one shopping complex with an escalator, and it was the "pride of the vietnamese". But one thing that struck me at that time, was how determined were the vietnamese to catch up with their fellow Asean. I could only conclude that this would not be an impossible feat, and look at the economics figures now. Whilst there, I met a local who was kind enough to invite me to her house - just like one of those narrow shophouses. The dwelling has two small rooms - one a living room turn into a bedroom at night (could only fit no more than 5 seater furniture) and a kitchen. Now, is it the hardship that makes them a much stronger / determined people? That lady now exports prayer garment to Malaysia and middle east...
Monday, September 04, 2006 3:02:00 PM

Anonymous said…
Oh wonderful Hanoi! I was in Hanoi during November last year for an official visit and despite the obvious hardship, the city still managed to prosper in comparison to the other countries in the Mekong region. (With the exception of Thailand). A truly busy but wonderful place to be in!
Monday, September 04, 2006 8:37:00 PM

Anonymous said…
Memories come back about Hanoi and I remembered went there quite some time ago. I am not surprised if Hanoi has changed a lot and being member of ASEAN, a lot of meetings being held there which bring lots of tourists and make their economy grows. I have not been to HCM City and from what I read and heard, the place is more commercialised and I guess less history compared to Hanoi which is the seat of the Government.
Tuesday, September 05, 2006 5:26:00 AM

Anonymous said…
It was a while ago but I love the water puppets! Go to Hanoi, must catch the water puppet show! It was great! You don't see this anywhere else in Asia as far as I'm aware. Bring back a water puppet :-) Love the picture of the buildings, will try paint it one day...
Tuesday, September 05, 2006 7:44:00 PM