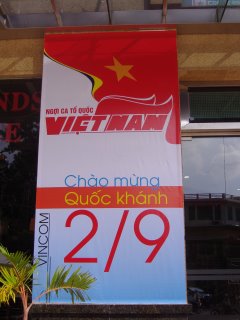 One of the downside to blogging about Brunei when you are overseas is that you can't do it. I tried but I don't have any reference materials with me and it is not exactly cheap calling someone to confirm on certain things. Yes, there is an amount of work involved in writing a post and all these have to be ready before I write it. So, I thought I will spend a little bit of time talking about Hanoi, its people and being an amateur economist, look at the economy as well. I haven't spent that much time outside the conference area but the spare time that I have, I have tried to utilise that as much as I can.

The last time I visited Hanoi properly was in 1998 and my ambassador father took me around Hanoi and its surrounding. So I saw a different kind of Hanoi as opposed to the ordinary tourists or visitors. I came back in 2000 and even then I have seen the prosperity starting to come into Hanoi. The main shopping area then was the Han Gai area - the 36 streets. Each street specialises in something like flowers, lacquer wares, iron works etc. So the most visited tended to be the touristy area that sells the artwork, the embroided table cloth etc. When I first visited the area, it was run down but 2 years later, the shops which only had wooden doors suddenly had glass doors. Now 6 years later, some of these shops don't even look as if it belongs to Hanoi. It can blend in easily with the artsy and modern shopping areas in Singapore or any of the big cities in Asia.

Oh yes, I forgot there are now shopping centres in Hanoi and we were passing by one yesterday when we had to go through this massive traffic jam just outside the Vietcom Tower where everyone was slowing down to watch presenters and dancers advertising LG products including the plasma and LCD panel television sets.

Eight years ago, there were already many motorcycles. But yesterday there was even more motorcycles. Our car couldn't even move. It was like rivers of motorcycles. What's amazing is that half of these motorcycles look as if they just came out of the motorcycles dealers. These are new and you can tell that the Vietnamese are now very affluent. A few more years the roads will be choked up with cars instead of motorcycles.

I was asked to look at Vietnam's economy. How can Vietnam grow so fast at a blazing 8% growth as opposed to Brunei's snail like development of 0.4% last year? Vietnam has been able to cut their poverty rate from 11% in 2003 to 8.3% in 2004 (we haven't even be able to agree what the poverty rate in Brunei is). All the growth is due to increases in domestic demand and exports as well as buoyant consumption and investment and a strong global markets for oil and commodities. At the same time the government continues to pursue and expansionary fiscal policy and this was able to cover the cost of reforms and infrastructure. At the same time too, the private sector had an increasing role.

Is there any lesson here for us in Brunei? Yes and no. Expansionary fiscal policy helps (for the economically challenged, expansionary fiscal policy means the government spends more money) and this can drive up demand in the short term due to the boom in government expenditure. In Vietnam's case, there is not much leakage. In other words, the government builds buildings, the Vietnamese workers get the money and they get to spend it and the retail and business sector booms etc. But in Brunei, government builds the buildings, but the workers bring the money back to the countries they are from and hardly anything gets spent in Brunei. We don't have a cheap labour force for us to produce anything that can be exported in the volume that Vietnam has. In other words, the Brunei economy and the Vietnamese economy are different and we probably need to look at other models if we want to improve our economy. But 8% growth is really something we need to find if we really want Brunei to be more developed in the future. 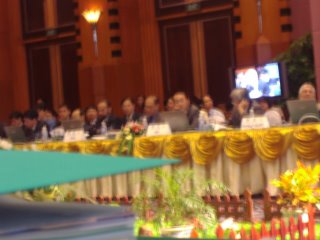 PS. For those who knows what meeting I am attending and interested in knowing what happened, I can tell you that yesterday's meeting was very hot indeed. There were two issues still sticking in the press statement and even though we spent four hours, we still couldn't move on these two sticky sentences. The first one is our friendly superpower's topic of today and even though they have moved slightly but the Asian Superpower refused to even have the sentence in. The second one was less contentious, something about asking our great big brother's fund to speed up a little bit on the reassessment of shares etc. The downside is that the two day meeting which was supposed to end yesterday have to be reconvened this morning at some ungodly hour so that we can settle those two sentences before the ministers meet this afternoon. I have a feeling that we will still be unable to move after 5 hours.

Another topic which we ASEAN countries had to meet very quickly on the sideline yesterday was about a meeting which a superpower wanted to have with us rather than meet us individually in bilateral meetings. I thought that was a rather undiplomatic move until someone said the new guy was a former international bank CEO and he does not understand diplomacy. Alright. The concensus was we are not tiny little vassal states to be pushed around. The small guy is fighting back. 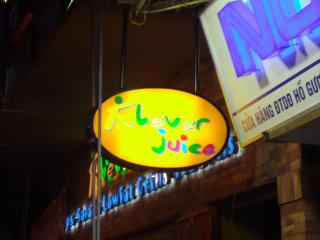 PPS. Another interesting photo from Hanoi. If you drink this juice, you will become very klever and can spell korrekly.

Anonymous said…
Mr BR, you've raised many interesting economics issues there. What is a poverty rate anyway? The number of people living below the 'poverty line'? What is the poverty line in Brunei?

We in Brunei are very fortunate to have many basic necessities such as minyak, beras, healthcare, education heavily subsidised by the government, that it would be fair to say, by international comparisons at least, we probably have a small number of people who are under 'absolute poverty'.

A more important measure is 'relative poverty'. In economic theory, any policy (however unpopular) which redistributes income from the rich to the (with their relatively smaller marginal income to consume) to the poor (with their higher marginal propensity to consume) will increase aggregate demand in the country. Why? This is because there is greater leakage amongst high income earners in the circular flow of income (leakages take the form of imports, savings and taxes, but amongst high income earners imports mostly).

Yes, Brunei and Vietnam are two different economies. Vietnam is a relatively poorer economy, but the circulation of income stays within the economy, hence a higher growth rate. Brunei on the other hand, is a richer country, but there are too many leakages in the circulation of income that it is very difficult for expansionary fiscal policy to have much of a positive multiplier effect on the economy hence a lower rate of economic growth.

Encouraging people to spend in Brunei is one thing, but simply saying so does nothing. Are consumers to blame for spending a lot of money on imports if they cost cheaper than local alternatives? Incentives must be put in place for it to happen.

Also, leakages in the form of savings may look bad in the short run, but it creates funds for investment and acts as engines for growth in the long run. Higher savings are so important that even if incentives to save are not enough then maybe it should be enforced (like in Singapore which has a 40% national savings rate largely due to its CPF system, which might in turn have attributed to its high economic growth)
Thursday, September 07, 2006 3:31:00 PM