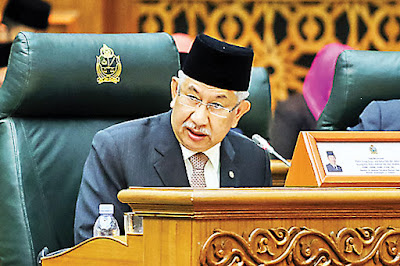 THE Ministry of Finance (MoF) has been allocated a budget of B$752.7 million for the 2017-2018 financial year, B$272 million less compared to the previous fiscal.

He said the reduction in allocation is due to an allocation of B$300 million for the Temburong Bridge Project under the development expenditure category which was previously under the miscellaneous services account of the Ministry of Finance.

In the speech, the minister highlighted initiatives that have been undertaken, with the cooperation of other government agencies, to enhance national productivity and service de-liveries to the public and private sector and create a conducive and competitive business environment which will indirectly support the formation of a more robust and sustainable economy and create more job opportunities for locals.

Starting December 2016, the Royal Customs and Excise Department has begun 24 hour/seven days operation at the Muara Container Terminal with the hope to enhance the country’s import and export activities, he noted, adding that a Code of Ethics for professional accountants was introduced on January 1, 2017.

The minister also mentioned the introduction of Brunei Darussalam Accounting Stan-dards (BDAS) which he said will be enforced from January 1, 2018.

Also mentioned by the minister was the introduction of the Insolvency Order 2016 for restructuring and rehabilitation of companies that are facing financial and operational problems as well as the establishment of a ‘Board of Review’ tasked with examining tax disputes of companies to ensure a fair and accurate administration of corporate tax.

The minister also mentioned that since the launch of the Facilities Rental System (FRS) for sport facilities on September 1, 2016, a total of 114 facilities were rented and until February 2017, B$74,383 was collected.

For the financial year 2017-2018, the Ministry of Finance will continue to stress on prudent spending, increasing the productivity of services provided by it, diversifying the economic base and activities through promoting ease of doing business; building highly skilled human capacity and preserving the welfare of the public.

The minister outlined steps in support of the ministry’s priorities mentioned above such as a public financial management reform, and informed that starting April 1, 2017, ordinary expenditure will be combined with National Development Programme (NDP) expenditure, while special expenditure will be ended.

Elaborating on the effort to expand government revenue, the minister mentioned that the private sector still owes the government B$300 million, including among others, electricity arrears totalling B$260 million. The minister also detailed initiatives such as widening tax base, strengthening tax assessment and enforcing tax collection through field audit and ‘public rulings’.

Among the expenditures under the recurring expenditure includes B$541,199,982 – to be shared by the Ministry of Finance and all other ministries and government departments. Examples are holiday and airfare allowances, expert and advisor visits, study allowances for government staff and officers.

The Study Focus Account, among others, include the implementation of Graduate Apprenticeship Scheme ($15 million); Recruitment and Management of Expert Teachers for English Language and Mathematics ($17 million); an allocation to support the dev-elopment of micro, small and medium enterprises ($5 million); ‘Project Focus’ programme ($10 million), and miscellaneous projects ($7.5 million).