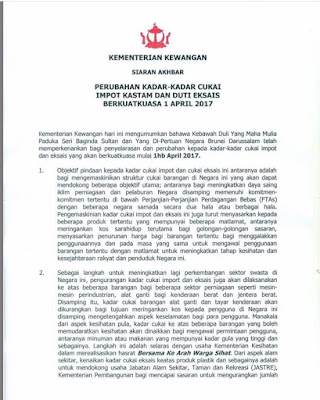 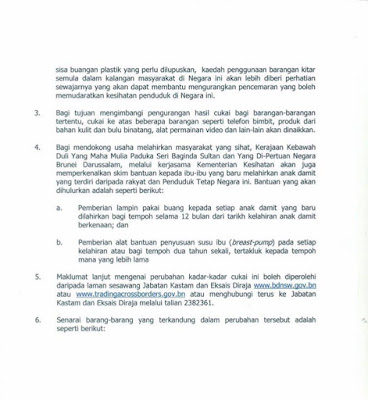 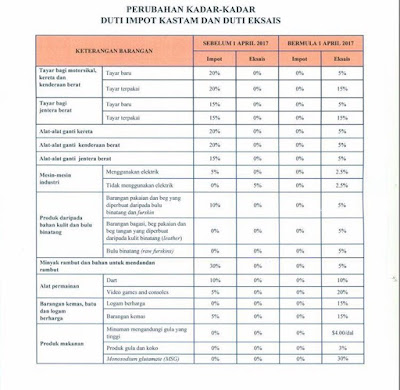 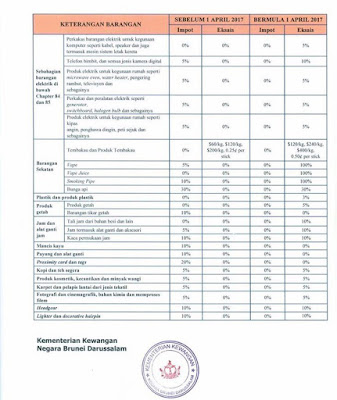 THE government has streamlined customs import tax and excise duties of several essential goods coming into the country.

These include slashing tax rates on car spare parts and tyres which will see a reduction in their retail prices and hiking tax of unhealthy food products in order to inculcate a healthier lifestyle.

To offset the new import and excise duty cuts, import tax on items such as mobile phones will be increased, which will likely to see an increase in their prices once the new tax regime is in place.

During the budget overview for the financial year 2017-2018 on the second day of the 13th Legislative Council (LegCo) session yesterday, YB Pehin Orang Kaya Laila Setia Dato Seri Setia Awang Haji Abdul Rahman bin Haji Ibrahim, Minister at the Prime Minister’s Office and Minister of Finance II, said the amendments were made as a measure to maintain security, welfare and well-being of the people, apart from strengthening the country’s economy.

Under the new amendment to the Customs Import Tax and Excise Duty Order 2012, next month will see among others the reduction of customs import tax of new tyres from 20 per cent to five per cent while for used tyres, it will be reduced from 20 per cent to 15 per cent. The minister said this move is to encourage the use of new tyres for vehicles and enhance the safety of road users.

Under the amendment, customs import tax for car spare parts will also be reduced from 20 per cent to five per cent which will reduce the cost of car maintenance and repairs for consumers.

Meanwhile, the excise duty for food and beverage products containing high sugar and Monosodium Glutamate (MSG) will be hiked, to reduce the demand for such unhealthy food products and increase the demand for healthier and alternative food products, in line with the Ministry of Health’s vision.

In terms of environment, the increase in excise duties on plastic products is to support the Department of Environment, Parks and Recreation’s efforts in reducing the amount of plastic waste to be disposed of, encouraging the use of recycled materials and minimising pollution that can harm the environment and health.

According to the MoF, the objectives of the amendments are to streamline the tax structure in the country to support a number of key objectives such as to enhance the competitiveness of the business and investment climate in the country and as well as to fulfil certain commitments under the Free Trade Agreements (FTAs) with several countries, either on a bilateral or multi-lateral basis.

The restructuring of the import and excise duties also focuses on specific products with the purpose of meeting certain objectives such as reducing the cost of living for specific groups; bringing down the prices of certain goods to encourage their usage and at the same time controlling the use of certain products to improve the health and well-being of citizens and residents in the country.

Further information about the amendments to the tax rates can be obtained from www.bdnsw.gov.bn or www.tradingcrossborders.gov.bn and by contacting the Royal Customs and Excise Department at 2382361.