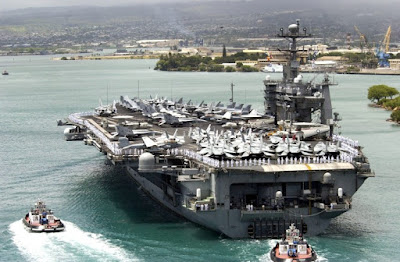 SENIOR defence and military officials from Brunei Darussalam yesterday had firsthand view of the US Navy aircraft carrier, USS John C Stennis (CVN-74) which is currently passing through international waters close to the Sultanate on a routine operation.

The visit on board the supercarrier was hosted by Rear Admiral Marcus A Hitchcock, the Commander of Carrier Strike Group 3.

While at sea, the group saw a demonstration of an aircraft launching and recovery operations as well as air fire-power demonstration by the assets of the Carrier Strike Group.

According to the Ministry of Defence, the invitation signified the warm state of bilateral relations and the mutual desire to enhance defence cooperation between Brunei Darussalam and the US.

The visit, coordinated by the US Embassy in Brunei Darussalam, also aimed to increase the understanding of naval aviation and carrier strike group operations.

Also part of the delegation were senior officials from the Ministry of Foreign Affairs and Trade and members of the local media.
government