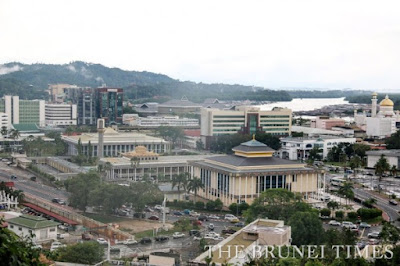 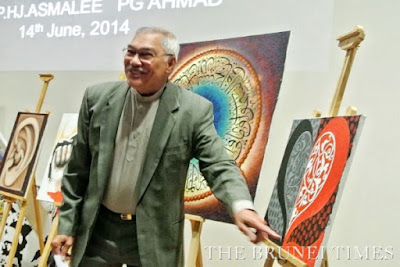 ATTENDING one of Pg Dato Paduka Hj Asmalee Pg Ahmad’s inspirational talks is a once-in-a-lifetime opportunity for many as it heightens interest and knowledge about art in its many forms.

This accomplished veteran artist aims to motivate art students with his many masterpieces and during a question and answer session, he was inquired on “why he enjoyed painting historical images and what was his goal in pursuing a career in art”.

For starters, Pg Dato Paduka Hj Asmalee’s interest in painting began as a hobby when he was a little boy.

“Historical events transpire every second, minute, hour and day and this continues on until our very last breath,” he said during an interview with The Brunei Times. “Only through painting and photographs can chronological facts be recorded and the past or present state of affairs as well as environment can be properly portrayed.”

“Art came before everything and all forms of writing originally evolved from pictograms. By learning to record visible objects, and expressing ideas through engraving or painting on relatively flat, two-dimensional surfaces, humans produced visual aids even before speech,” he added.

Historical transformation can be seen in his panoramic painting depicting Brunei Town from the 1940s to 1950s and a 7.5-by- 2.5-feet painting of Bandar Seri Begawan during its independence in 1984, both of which describe the same location.

“There are vast differences in both paintings due to the physical changes and modernization which have taken place in the sultanate. The memories are nostalgic reminders of the past that has shaped our country while the future which is beyond our knowledge and grasp is something to look forward to,” said Pg Dato Paduka Hj Asmalee.

The sketch of Brunei Town in the 1940s reminded the veteran artist of his earlier days as a little boy living with his family in the capital during the Japanese occupation.

“My father’s house used to be located at the current Lapau (Audience Chamber) and the Dewan Majlis site, right in the centre of town. Both of the present sites were built and constructed above the Kianggeh River which was reclaimed and filled with earth for the construction of new roads and other facilities,” he reminisced.

The river was diverted by excavating a new drainage system which starts from the junction of Chung Hwa Middle School (CHMS) to the Residency Bridge. The Tamu Kianggeh (Kianggeh market) and nearby buildings are also situated above the river, while the wooden bridge that previously joined the town and the market was reduced to barely 12 feet from its original 100 feet.

“Tall buildings did not exist and when the Allied Forces bombed the town, the townspeople were faced with complete and utter destruction. That was a moment of suffering and hardship as the population had to rebuild the municipality from scratch,” he said.

The town was then renamed as Bandar Seri Begawan during the reign of Sultan Omar ‘Ali Saifuddien Sa’adul Khairi Waddien who ascended the throne on June 6, 1950.

“The Architect of Modern Brunei focused on raising the country’s standard of living and when his son, His Majesty Sultan Haji Hassanal Bolkiah Mu’izzaddin Waddaullah, Sultan and Yang Di-Pertuan of Brunei Darussalam took over the reign, an era of expansive developments began – this is Brunei as we see it today,” explained Pg Dato Paduka Hj Asmalee.

The paintings were executed in one centimetre boxes similar to a mural and with small, distinct dots of colour called pointillism which was first developed by Georges Seurat; in this case Zikir (remembering Allah SWT) is recited as Pg Dato Paduka Hj Asmalee applies the dots.

When asked how many dots were needed to cover the whole painting, he replied that it was uncountable due to the many layers of dotted brush strokes and a variety of colours used.

Taking six months to finish the painting and three to four hours a day reciting the Zikir, has gave the veteran artist great pleasure and satisfaction, especially when he stood back and viewed the end result.

Painting the past and present using his unique technique of Zikirism has opened his mind and vision along with a deep understanding regarding life in this world and the influences taking place – economically, politically and socially.

Pointing to a photograph which was taken of the capital from Jalan Berita recently and of the same vista as his paintings, Pg Dato Paduka Hj Asmalee said that there has been a great development which is of vast contrast to that of 1984.

He added that Bandar Seri Begawan grew 10 times to its present size of 100.36 square kilometres and there are now buildings surrounding the capital such as the majestic Sultan Omar Ali Saifuddien Mosque and magnificent Legislative Council Chamber (Lapau) which are testament to the beauty of Bandar Seri Begawan.

“Whatever we are enjoying today are blessings from Allah SWT and the future looks bright. Alhamdulillah, I am grateful for the gift and artistic talent that has bestowed upon me by the Great Almighty and it has not gone to waste,” said Pg Dato Paduka Hj Asmalee.