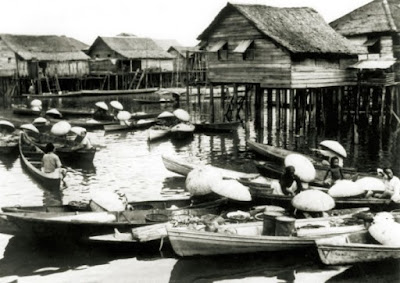 Brunei in 1915
written by Rozan Yunos
published in The Brunei Times
on Monday, November 16, 2015

IN 1915, one hundred years ago, World War I had just started. It was in September 1914 when the First Battle of the Marne began resulting in a French victory, halting the German advance towards Paris. In 1915, Tsar Nicholas had taken command of the Russian armies and the British forces used gas in a battle near Loos, but the shifting winds caused 60,000 British casualties instead.

Far from the battle fields of Europe, Brunei was coming to the end of the first decade since the British Resident took over the government in 1906. The Brunei Annual Report of 1915 was written by its then British Resident, Ernest Barton Maundrell. Thirty-five-year-old Maundrell who had entered the Federated Malay States (FMS) Civil Service in 1903 was first appointed to serve at Seremban, Negri Sembilan, before he was transferred to Singapore in 1911, and in 1915 was appointed Acting Resident in Brunei. His annual report dated April 5, 1916, was signed just before he was murdered a few weeks later on May 18, 1916 by a Sikh policeman.

The year 1915 for Brunei was described by Maundrell as “one of quiet progress and beyond a rise in the cost of commodities the peaceful life of the kampongs was little disturbed by the Great War”.

It was on February 19, 1915 that Maundrell became the first full time British Resident in Brunei. The post of Assistant Resident who used to be the one who governed Brunei on a day to day basis was abolished.

A number of other appointments were also made during the year. The post of Superintendent of Monopolies was replaced by a Treasurer and Superintendent of Customs and was filled by EG Goldfinch. E Roberts whose name is immortalised for Jalan Roberts in Bandar Seri Begawan was in charge of public works and surveys.

Brunei citizens were also appointed to be office bearers. Among them were Pengiran Anak Hashim who was the Magistrate for Belait and Dato Petinggi, the Magistrate for Tutong. The state finances were just break even. Brunei had borrowed about $439,750 from the Federated Malay States Government. A sum of $300,000 was taken out in 1906 to 1909 and $139,750 from 1911 to 1914. These loans were used for a number of items, mostly for the redemption of monopolies rights, purchase of tulin titles, purchase of cession monies and also for the erection of government buildings, purchase of launch and other general purposes. The total revenues for 1915 was $129,529 and the total expenditure was $114,518.

1915 also saw a considerable expansion in the trade of Brunei. Both imports and exports showed large increases compared to the year before. Maundrell described this increase due to enhanced prices brought about by World War One (1914 - 1918) as well as greater volume of imports and exports.

The exports of cutch increased by $32,000, jelutong and other forest produce by $30,000, plantation rubber by $60,000 but coal production maintained at the previous year’s level. Due to the failure of the rice harvest at the beginning of the year, rice was imported in larger quantities.

The Brooketon Coal Mines in Muara total output was 30,413 tonnes of which 22,163 tons were exported and 232 tons used locally. Four Norwegian and two British ships entered Muara to get bunkers. However the majority of the coal was exported to Labuan and sold to the Straits Steamship Company, Heap Eng Moh SS Co as well as three ships of the Japanese Navy.

Cutch continued to be a main export item and provided work for some 1,000 people of which 150 were directly employed by the Island Trading Company. Most of the cutch extract were exported to Great Britain but some were also exported to America, Japan and China.

The supply of bark from the more accessible part of mangrove were getting scarcer. Supplies were now from Tutong and Weston in North Borneo.

Drilling for oil continued. The British Borneo Petroleum Syndicate lease at Rampayoh was worked on by Koloniale Petroleum Maatschappij. Well Number Two at a depth of 1,890 feet found in 1914 had produced at the rate of four tons per day.

There were also prospecting work in other parts of Brunei such as in Paya Minuman near Kampong Ikas as well as in Jerudong.

The padi crop of 1915 failed due to a prolonged drought at the beginning of the year. Almost all of the padi production was carried out by the Kedayans.

Several rubber plantations near Brunei reached producing stage. More areas were planted including in Labu Estate (400 acres), Brunei Estate (475 acres) and the Batu Apoi Estate (415 acres). About 406 acres of land were registered especially in Kiulap, Kota Batu and the Baru-Baru Island. The Headman of the Kedayans in Kampong Kiarong together with about 20 villagers were given 15 acres each for padi clearings.

The number of students in the vernacular school in Brunei Town was around 40 but the school was closed for a few months due to the difficulty in finding a replacement for the late schoolmaster, Awang Yahya. Another vernacular school was opened in Muara for about a dozen boys at a local Malay house.

A new lapau or Audience Hall for the Sultan was built on stone piers over the river. A school house with teacher’s quarters was completed as well as a definite start with a bridle path to Tutong and Belait.

All in all, it was indeed a year of quiet progress. Maundrell expressed with confidence that during the past ten years, good foundation had been laid for the renewed prosperity of Brunei, “a prosperity to which the raiat (rakyat or people), free to enjoy the fruits of his labours.”
All rights reserved
Courtesy of The Brunei Times
golden legacy history