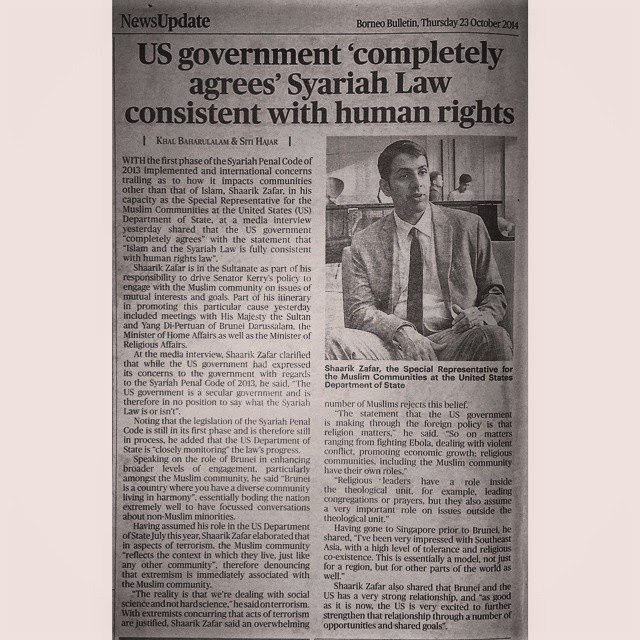 Shaarik Zafar, the US State Department’s Special Representative to Muslim Communities, said his government believes that Syariah and human rights are compatible, although Washington has expressed concerns about some of the punishments prescribed under the Code.

Zafar, who is in the Sultanate on a two-day visit, met with His Majesty the Sultan and Yang Di-Pertuan of Brunei Darussalam and senior religious officials yesterday, to discuss US engagement with the Muslim world, including counter terrorism and Brunei’s introduction of the Syariah Penal Code.

“Brunei has made commitments to international religious freedom and other human rights. The US government is not in a position to say what Syariah law is and what it isn’t. What we do say is that governments that have made a commitment to uphold fundamental human rights have an obligation to do so regardless of what the particular penal code is,” he told local media yesterday.

“We were told that Islam and Syariah are fully consistent with human rights, and we fully agree with that. What we heard consistently today is there is no contradiction,” Zafar added.

The envoy said during his meetings he raised concerns about punishments prescribed under the Syariah Penal Code, such as amputation for theft, stoning for adultery and the death penalty for murder.

“What we’ve been told is the evidentiary standards that would apply are so high that in reality these penalties would never be carried out. This legislation took some time to be developed it’s still going to be taking time to be implemented,” he said, adding that the US will continue to monitor developments in Brunei. “We look forward to learning more and working with the government of Brunei.