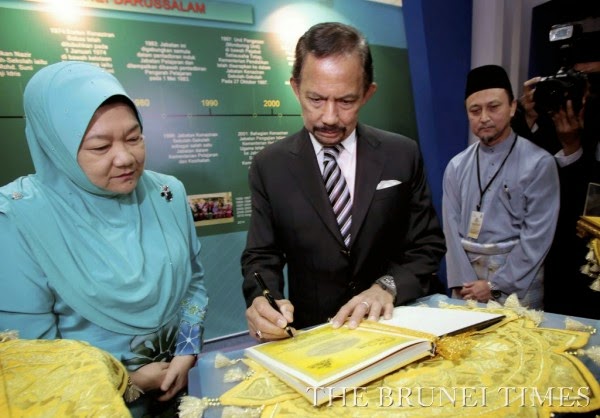 Friday, October 10, 2014 - THE Ministry of Education (MoE) must not only focus on the strengths and achievements of the national education system, SPN 21, but it must also look into the system’s faults and shortcomings, if any, as it conducts its review.

His Majesty the Sultan and Yang Di-Pertuan of Brunei Darussalam in his Teachers’ Day titah said: “I still remember when the system was first introduced it showed a number of flaws. Have these weaknesses been addressed? What is the outcome?”

His Majesty in commending the ministry’s efforts also lauded its initiative to review the system.

His Majesty said he was pleased to know that the literacy rate in the country for men and women age 15 to 24 were at 99.18 per cent and 99.53 per cent, respectively, which showed that Brunei had met one of its targets in its Millenium Development Goals.

His Majesty said that Brunei had also fulfilled six objectives in the Education for All (EFA) framework, which need to be achieved by 2015.

“Based on reports released by UNESCO, we have performed well compared to the situation in other countries (where) 250 million children worldwide are unable to read, write and count,” said His Majesty.

“One hundred thirty million children in primary schools were found to have not met the minimum standards of learning, and another 120 million have low rates of attendance in primary schools, including a total of 57 million who are not in school.”

“Certainly we do not want to hear that we would also be a contributor to those numbers,” said the monarch.

The monarch also expressed his joy in the knowledge that the country is now able to provide “human capital” services, delivering local trainers to teach the English language to neighbouring countries compared to the past where the country was only known as a financial contributor.

Noting that Bruneians are part of the world’s citizens enjoying the progress of education, His Majesty reminded people not to forget Islamic education as the foundation of the education system in the present day.

“This is where we began. Whether it be formal or informal, we shape and cast our education based on the foundations of Islamic education. This is our Brunei and our education; none can influence or change it,” said His Majesty.

His Majesty also said that with the foresight of Almarhum Sultan Haji Omar ‘Ali Saifuddien Sa’adul Khairi Waddien, an educational policy balanced with the emphasis of Islamic religious education was implemented, besides developing normal education.

The policy, said His Majesty, has been successful in producing quality local intellectuals and had become increasingly strong over time.

Not only the policy was able to produce the human capacity needed, said the monarch, but it also managed to unite people in a strong unity anchored to Malay Muslim Monarchy (MIB).

His Majesty also urged teachers to prove their prowess by having competent leadership qualities, besides having an extensive knowledge as this is where greatness of teachers is seen, giving them continued respect.

“Teachers should remind us not to be complacent, and to work hard to strengthen the teaching and learning that is directed to the skills and expertise of the 21st century,” he said.