Brunei Down on Ease of Doing Business 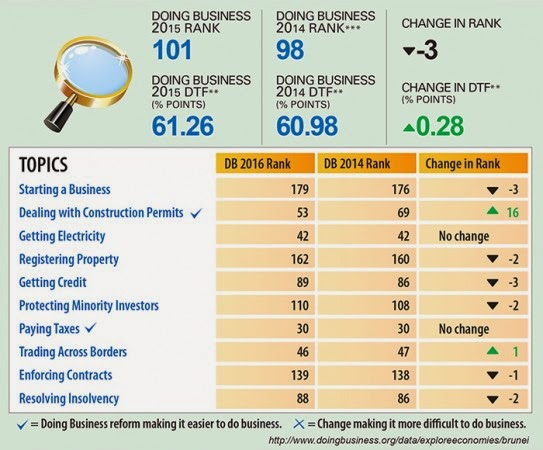 This is 42 notches lower than its 59th ranking in the previous year.

The Sultanate ranked lower in terms of registering property, getting credit and resolving bankruptcy.

The Washington-based lender said entrepreneurs will need 101 days and go through 15 procedures to set up a new business in the Sultanate.

On the other hand, entrepreneurs in Singapore - which is one of the easiest places to run a business according to the World Bank report - only need 2.5 days to open a business, 31 days to get electricity and four days and $440 to import a container.

Businessmen also need 298 days and go through seven procedures to register a property in Brunei.

In terms of getting credit, economies are assessed based on their credit reporting systems and the effectiveness of collateral and bankruptcy laws in facilitating lending.

The legal rights index ranges from 0 to 10, with higher scores indicating that those laws are better designed to expand access to credit.

In this regard, Brunei’s score of four is relatively low compared to the average six by other countries in East Asia and Pacific as well as member state of the Organisation for Economic Co-operation and Development.

On the plus side, Brunei has improved across two of the 10 indicators that were reviewed by the World Bank.

The World Bank said Brunei has made dealing with construction permits easier by consolidating final inspections.

Businesses only need to wait 88 days and go through 17 procedures to obtain a permit for construction activities. This is shorter than the average 134 days in other countries within East Asia and Pacific region, although the number of processes on average is fewer at 14.

The World Bank added that Brunei has also made paying taxes easier for companies by allowing joint filing and payment of supplemental contributory pension and employee provident fund contributions and by introducing an online system for paying these two contributions.

Brunei’s total tax rate on businesses amounts to 15.8 per cent.

In contrast, businesses in Malaysia - which ranked second in ASEAN and 18th globally - pay a total tax rate of 39.2 per cent.

For the Doing Business Report 2015, the World Bank has introduced several changes in methodology and scope of assessment from a heavy focus on the efficiency factors towards the assessment of the quality of legal infrastructure within an economy and how they promote efficiency in the delivery of services.

The revision of this methodology, which shifted from the ordinal system based on percentile to cardinal metric ranking system, sees a new scoring structure based on the ‘Distance To Frontier (DTF)’ from the Best Performers / Practice of participating economies.

The use of aggregate values of the overall DTF scoring across 10 ease of doing business indicators is now the basis of new ranking for each of the economies.

Based on the new methodology, Brunei’s rank in the Doing Business Report 2014, was revised to 98th, which means the Sultanate only slipped 3 notches.

The World Bank gave Brunei an overall DTF score of 61.26 in this latest ranking update.