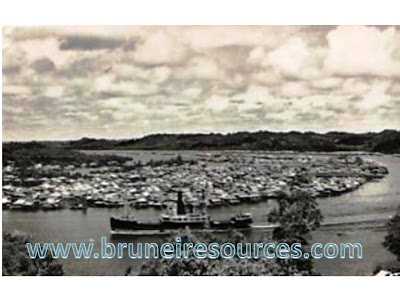 I was passing by Kampong Ayer the other day and I remembered when I was a small boy, there used to be ships passing by the Kampong Ayer houses. That was when the Bandar Wharf is being used as the main port for Brunei. But in those days what looked like big ships were actually relatively small ships. Bigger ships could not make it into the Brunei river, dropping anchor at Sapo Point and having tugboats bring their cargo in.

When HMS Britannia bringing Queen Elizabeth and Prince Phillip, the ship dropped anchor at Dato Gandhi because that was about the deepest part of the river that the ship can go into. You can still see the place and many who do not know the history would be wondering why there is a nice roof covered wharf by the riverside at Kampong Dato Gandhi.

When the Muara Deep Sea Water Port (it was originally called Deep Sea Water Port or Pelabuhan Air Dalam Muara, today it is only known as Muara Port) opened in 1970, the Brunei Wharf Port was used for local ships only. But by now, the only big ships passing by is the large barges carrying gravel to the landing sites at Kampong Medewa. This too will be gone soon when the landing site will be moved elsewhere.

This postcard is what it must have looked like in those days when big ships passed through Kampong Ayer.

View from NY said…
Dear BR, Having been a keen follower for your blog and a fan of old photographs and stories about our beloved Brunei, I would like to salute you!! You are truly an asset to Brunei and to future generations. Through your love of history BR can potentially teach more about Brunei to more people thn any history teacher. So appreciation is due where it is well-earned and deserved.
Tuesday, January 27, 2009 11:28:00 PM