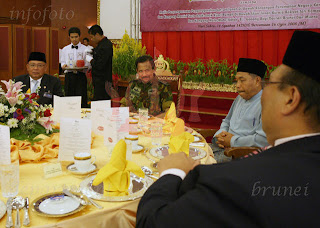 It was almost 4 pm yesterday when we had lunch. His Majesty must have been so tired shaking all those hands and visiting all those houses. By the time we got to sit down, I was very amazed that he still had the energy to talk to those around him. I sat about 3 seats away but he still took the time to acknowledge all of us around the table. What did we talk about?

Yesterday's ceremony was for house owners in Katok B. Katok B is actually a strange name. It is actually located in Kampong Mata-Mata. Many years ago when PWD was given funds for the original Kampong Katok, they had left over funds for earthworks and infrastructure works. Rather than leave the money unspent, they found another area and decided to call it Katok B so that they can use the funds for that. The engineers thought Katok B was near Katok A. Technically. On a map. But in reality, the two places were separated.

The houses are for STKRJ schemes and not RPN schemes. There are two housing schemes in Brunei. One is called the Skim Tanah Kurnia Rakyat Jati and Rancangan Perumahan Negara. The latter is for every citizens but the first is limited to rakyat jati. Which is better? They are both the same. It used to be that STKRJ was run by the Land Department and RPN by the Housing Development Department (HDD). Nowadays STKRJ houses are built by PWD but allocation is handled by HDD. The better solution would be to merge the two but since most projects are on-going, these have been left to carry on the dual ways. STKRJ's houses are all Class D whereas RPN houses ranges from the bigger ones to the smaller ones.