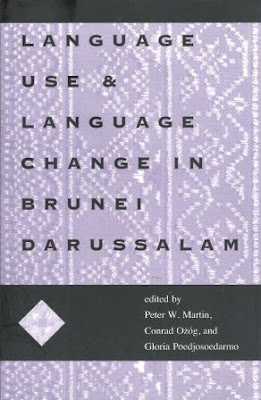 I haven't done a Brunei book review for quite a while. I thought I will do one on the many books that have arrived over the last couple of months.

This book 'Language Use and Language Change in Brunei Darussalam' I thought was particularly interesting to people who study languages in Brunei. We take our languages for granted but apparently according to language researches, our beloved country despite being small both in terms of size and population, has a remarkable variety of linguistic diversity that it provides and I quote '..a veritable laboratory for linguists in the fields of Austronesian lingustics, bilingual studies, and sociolingusitic studies, particularly those dealing with language shift..' There you go, another hidden treasure in Brunei.

The book contained 19 research papers some of them written by our own researchers at UBD including Datin Hajah Rosnah Haji Ramly, Fatimah Awg Chuchu and Hajah Sumijah Alias but the majority of them are written by non-Bruneian researchers. The 19 papers are divided into three sections - one on varieties of the Malay language in Brunei, one on other indigenous language and the final one on the role and form of the English used in Brunei.

The book started as a result of a project sponsored by UBD entitled "Verbal Communication in Brunei Darussalam: A Sociolinguistic Profile" and a number of papers were produced. What's interesting is that in our quest for the MIB, one cost may be the loss of our native languages. The researchers indicated that with the use of the Brunei Malay as a lingua franca between all speakers, there is clearly a decrease in the use of the other languages and even where the language is maintained, the form is slowly changing due to the influence of the Brunei Malay language. There is a great deal of what is known as codemixing and codeswitching between our Malay and English languages though we have not yet reached the level of Singlish (Singapore English), we are getting there (and let me be the first to use the term) Brunish (Brunei English).

The book is actually quite old. It was printed in 1996 by Ohio University Center for International Studies, USA as part of their series of Monographs in International Studies. I got my copy through the internet from The Select Bookshop Singapore for $63.00 which is fairly steep. You can get it from any of the online bookshops but unfortunately I don't think I have ever seen it being sold in Brunei. But it is an interesting read and to realise how the next generation speak their languages here in Brunei.
books culture current affairs dewan bahasa words