History of Brunei Students Hall in London (First Used in 1977) 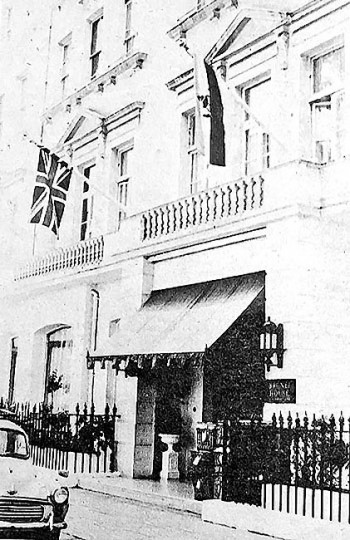 The Brunei Hall in Paddington was first used in 1977. This news from Borneo Bulletin dated 6 August 1977 tells the story:

AUGUST 6, 1977 – There is a part of Brunei in the heart of this huge city which is a showpiece to other countries.

This is the five-storey Brunei House, a palatial building and by far the finest student hostel in Britain.

New arrivals in England immediately feel at home after walking through the glass doors as they are almost bound to see some familiar faces from Brunei.

The building accommodates up to 170 students, with at least 100 usually in residence. But it is not merely a hostel. It is more of a social gathering point for all Bruneians in Britain, with the busy restaurant serving up to 270 meals at a time.

Situated in a quiet square in Paddington, and only a short walk from Hyde Park, the hostel was formerly an American hotel which the Brunei Government bought for $2.95 million.

In charge of the day-to-day running of Brunei House is B M Chapman, the warden, who arrived to supervise alterations to the building four months before the hostel opened in November 1975.

His wife, a qualified nurse, makes it a family affair by doubling as matron and domestic supervisor. Chapman’s wife is a popular figure and has become something of a confidant to the many students who pass through the hostel. In overall responsibility is Pehin Sir Dennis White, the Brunei Government Agent and former High Commissioner

Chapman proudly showed me around the spotless building – and explained that safety is the main consideration. No expense has been spared in installing sophisticated fire protection devices.

The thought of a fire breaking out in the warren of rooms and corridors on the upper floors is his fear. So smoke and heat detectors have been put up throughout the building, with any alarm automatically being pinpointed on a central board.

Fire drills are carried out through the numerous fire exits and all the doors in the corridors are fire-proof. “It would be no good being wise after the event,” said Chapman.

He added that before the hostel opened all the electricity was re-wired because it was considered too dangerous.

Starting at the bottom, the basement contains a games room for the students which includes billiards, table-tennis, darts and pinball soccer machines.

There are public telephones on every floor, and the basement also houses one of the three television lounges in the hostel. Here too are the kitchens, boiler room, toilets, baggage store room, the maintenance man’s workshop and a room for spares.

The rest of the space in the basement is taken up by a laundrette and ironing room and the students’ union council room with a section set aside for printing the student’s magazine.

Up the plushly carpeted stairs to the ground floor is the reception, two more television lounges, and the dining room with its own serving hatches.

Here too is the students’ union shop which sells such items as cold drinks and note paper.

The RBA office is also situated on this floor, together with an administration office, the matron’s dispensary, a staff flat and five of the students’ bedrooms.

The first floor is taken up by the Government Agency offices, a conference room, the residents’ prayer room and more bedrooms. The bedrooms occupy the other four floors, with the fourth floor set aside for the women’s room, and the sick-room and warden’s flat on the top, fifth floor.

By student standards the bedrooms are luxurious. All have their own bathrooms, with baths and showers, and a study desk. Of the 89 bedrooms, 12 are single and the rest doubles.

With the heavily subsidised rates the resident students only pay $44 a week. This includes free use of the laundry, having rooms serviced, and their meals – breakfast and dinner on weekdays and all three meals on Saturday and Sundays.

When the hostel first opened the students objected to the English food they were served, so they now get Malay meals – and just one English meal a week.

Awang Bujang bin Massut, the social secretary of the Brunei Students’ Union, organises entertainment for the residents. There is always a hall to celebrate the birthday of His Highness the Sultan and Yang Dipertuan and other special celebrations over Hari Raya.

Bujang, from Seria, and now taking a course in mass media and communications, obviously enjoys providing enjoyment for others.

The hostel has also been a venue for a wedding reception and once even a baby was born on the premises. “We certainly get plenty of variety,” said Chapman.

The hostel also employs two porters, two chefs and five other kitchen staff, a secretary and some part-time workers.

Students have also formed their own soccer group, practising every Sunday in Hyde Park and competing in contests against students from other countries.

“There are one or two very good players,” said Chapman, who has run youth teams in the past. He added that they also follow British soccer keenly on the television. The area also has public squash, badminton and tennis courts which some students use regularly.

According to the British Council there were 517 Brunei students studying in the United Kingdom recently. These included post-graduates, trainee nurses, technical students and those at both private and government colleges.

The ones staying at Brunei House have certainly never had it so good. And they have a lot to thank their government for. – Robin ALP

Courtesy of Borneo Bulletin's Lest we Forget