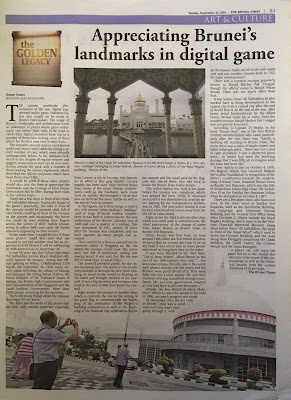 Brunei’s Landmarks in the Digital Game
By Rozan Yunos

The current worldwide phenomena of the new digital augmented reality game, ‘Pokemon Go’ has also caught on by many in Brunei Darussalam. The usage of Brunei’s landmarks and architectural icons as ‘Pokestops’ or places where game enthusiasts can collect their balls to be used to catch their digital monsters have led to a number of Bruneians visiting some of these places for the first time ever in their lives.
The car parks around the various recreational parks and places were suddenly seeing record number of cars which were virtually unimaginable before. At the Damuan Park, much to the chagrin of regular runners and joggers, many new visitors can be seen wandering around the park with a number of them reading the various signboards which described the ASEAN sculptures which have been there since 1987, almost thirty years ago.

It would be good if those same players during their visits to the various stops would also take time to appreciate the landmarks and the heritage of what Brunei Darussalam has to offer.

There are a few stops in front of the Sultan Omar Ali Saifuddien Mosque. During the height of the game’s popularity, the road in front of the mosque would be jammed solid full of cars slowly crawling in front of the mosque as the players and occasionally the driver too, could be seen swiping their fingers across the screen of their mobile phones trying to collect balls and catch the digital monsters appearing on their screens.

At the same time, it would be nice if those same players should also note that the mosque is not just another stop but an important icon for Brunei. It will be celebrating its 58th anniversary on this 26th September.

It was 58 years ago that His Highness Sultan Haji Omar Ali Saifuddien Sa'adul Khairi Waddien officially opened Sultan Omar Ali Saifuddien Mosque. During that official opening on Friday, 13th Rabiulawal 1378 Hijra, the 26th September 1958, many visitors came including the Sultans of Pahang and Selangor, the Acting Sultan of Johor, the Prime Minister of the Federated States of Malaya, the British High Commissioner and also representatives from Singapore and the Saudi Arabian Governments. More than 5,000 people turned up for the occasion.

There are many things about the mosque we do not know. The floor and the walls of the prayer hall are laid with marble imported especially from Carrara, a city in Tuscany, Italy and famous for its white or blue gray marble. Carrara marble has been used since Ancient Roman time. Some of the major Roman architectures such as the Pantheon were made from its marble. Michelangelo’s David was also carved from the same marble as well as the Marble Arch in London.

In the lagoon, lay a stone barge, a replica of a 16th Century Sultan Bolkiah’s ‘mahligai’ used to stage Al-Quran reading competitions. It was built to commemorate the new millennium of the Muslim Calendar Year of 1400 and cost $¼ million. This was completed in 1967, almost ten years after the mosque was completed and not built together as many people had assumed.

On the site of the SOAS Mosque before the mosque was constructed was a sawmill run by someone called Si Pinggang. The entire area was full of businesses cutting and sawing wood. It was said that the site was full of ‘abuk kayu’ or wood chips.

The sawmill provided planks for the entire Kampong Ayer. The wood or tree trunks were brought in through the river from Limbang. So wood trunks would be floating on the water and brought onshore to the sawmill. It was a big business and everyone who lived in the area at that time knew the sawmill.

This Police Station was built a few years before the mosque was completed which was around the early 1950s. It remained there until it was demolished to clear the entire Padang for the Independence declaration in 1983. The new police station is a few hundred metres away from the old site at Jalan Stoney.

Right across the field is also another stop which is a small park to commemorate the silver anniversary of the change of name from Pekan Brunei or Brunei Town to Bandar Seri Begawan.

Pekan Brunei was first built on land around 1906 when the first British Resident declared that he wanted the town to be on dry land. It was not so easy as many people were used to living their lives on the water. It was Peter Blundell in his 1923 book ‘City of Many Waters’ who wrote about Brunei at the end of the 19th century said “… the town was unique, the only one in the world built almost entirely over the water, and the Bruneis were justly proud of it. They were folks who live a semi aquatic life, and their methods of living, household arrangements, family life, and town government, adapted as they had been to life over the water ...”

Despite the first British Resident McArthur‘s efforts to move the Bruneis to dry land in 1906, not much progress were made. By December 1941, the dry land in Brunei Town was a small town with one major road going through it with all the houses made out of wood with nipah roof and one wooden cinema built in 1923 for night entertainment. There was a wooden mosque popularly known as Masjid Marbut Pak Tunggal, though the official name is Masjid Pekan Brunei. There was not much other than that.

It was Sultan Omar ‘Ali Saifuddien III who worked hard to bring development to the capital city from a ruined city after the end of World War II. At the end of the war, after heavy aerial bombardment by the Allied Forces, Brunei Town lay in ruins. Even the wooden mosque Masjid Marbut Pak Tunggal was completely destroyed. According to Captain T.S. Monks in his book ‘Brunei Days’, one of the first British military administrators who came immediately after the war, there was “… hardly a building left standing in Brunei Town. The main street was a mess of bomb craters and fallen telegraph poles … there was not a soul in sight anywhere. It was a shattered ghost town … so severe had been the bombing damage that it was difficult to imagine what the town had been like ...”

It was rightly so that on 4th October 1970, His Majesty Sultan Haji Hassanal Bolkiah Muizzadin Waddaulah in recognition of his father’s contribution towards the modernizing of Brunei Town, renamed Brunei Town as Bandar Seri Begawan which was the title of Al-Marhum Sultan Haji Omar ‘Ali Saifuddien III as the Paduka Seri Begawan Sultan when he abdicated on 4th October 1967.

There are a few other stops also historical ones in the other areas in Bandar Seri Begawan such as the Secretariat Building, the Dewan Bahasa and Pustaka Building and the General Post Office along Jalan Elizabeth II. Others include the Royal Regalia Building which used to be the Churchill Memorial Museum along Jalan Sultan Omar Ali Saifuddien, the stops in front of the Royal Wharf which used to house the Customs Building and the stops along Jalan Kianggeh comprising of the Lapau Building, the Youth Centre, the Chinese temple and the Tamu Kianggeh.

A player can still enjoy the game but he or she should also take time to be aware of the surroundings as well as the historical lessons from the various locations of those stops.