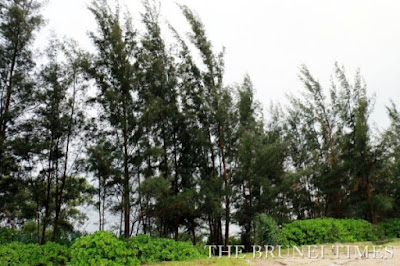 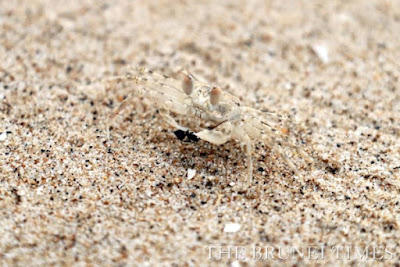 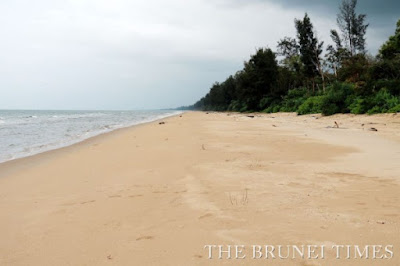 DEEP inside Jalan Kecil Sungai Liang, one can find another of Belait’s many ‘backyard beach’ located just next to Sungai Liang Recreational Park.

The recreational park is mostly used by the nearby community of Sungai Liang, populated by different ethnic groups from Malays to Dusun, Iban and a handful of mixed Chinese, who live there for more than 40 years.

To experience how the residents in the area spent their afternoon at the coastal park, I followed the lead of a 23-year-old resident, Mizi Rosman and his younger siblings who live less than a minute drive from the attraction.

Rather than taking the typical or what they say a ‘normal, boring main route’, Mizi lead us to our destination with a litte bit of adventure, crossing a small road at the back of their house and into the woods. There, we had to walk across rickety wooden planks to cross a small river. Mizi admitted that he has only used this way to the beach for a total of five times this year, as he works in the Brunei-Muara district.

When asked about crocodiles, Mizi said there have been sightings of the large aquatic reptiles, but none longer than two metres.

“There are never any serious cases with crocodiles in (the place we’ve been),” he said. “People would see it on sunny days and would just take safety precautions.”

After the patch of wood, we were welcomed by the blue and white views and sounds of ocean waves. The first thing that we saw was a run-down hut, built by some of the villagers who used to live much closer to the coast. Despite the hazy weather that has been afflicting the country for weeks now, there were no signs of smoky tinge in the air.

Upon a closer look at the beach, I noticed one difference which made the beach distinct from other areas. The beach is slightly raised before it meets the sea, due to the excess deposition of sand and silt occurring more often than erosion of the coast. This makes the ground spongy, which can be a challenge for joggers.

From the beach, we walked for a rough one kilometre along the coast to the west to reach Sungai Liang Recreational Park. There were no one else except us. I also noticed that the beach is clean with the exception of some empty bottles.

“It’s is secluded and only the residents come here, so that could explain why it’s almost spotless,” said Mizi. During the walk, he explained the course of our route; which is to go through another section of the woods, cross a stream before we can reach the outskirts of the recreational park.

The walk to the park from the beach was less worrying, since we went through a field of long grasses and tiny flowers, which makes for a nice photoshoot for shutterbugs. And although we had to walk on another shabby wooden bridge, it was more stable as compared to the rickety planks on our way to the beach.

The first physical sign of the park, which is visible from where we came, is the colourful playground. A few distances away from the playground, we saw teens playing and performing tricks at the mini skate park despite the limited space.

Aside from the playground, the park has a large space for community functions, toilets and parking spaces amongst other amenities. As you would expect, there are barbecue spots strategicly placed at various areas of the park, and a court for people to play basketball and futsal.

Recalling recent activities at the area, Mizi shared the story of when they celebratedAdau Gayoh(one of the festivals celebrated by Dusun community) as well as Gawai, celebrated by Iban community at the recreational park.

“We had a gathering here with our fellow Sungai Liang community (mostly related) during a celebration last August.”

In addition, every year, Brunei Methanol Company, which is based at Sungai Liang Industrial Park (SPARK), would hold a joint celebration with the community, where they have performances, lucky draw prizes and also a feast for the special occasion .

“It is common for people to organise family functions or gatherings at this place, especially when it comes to ethnic festivals,” said Mizi who added that scouts have also celebrated family day at the park. However, not all is nice and dandy at the secluded recreational park. One of the inconveniences, which is common at less cared-for areas, is the unkempt grasses that surpasses half a metre at some areas. Although at times, the grass is cut, they easily grow again after a short time.

For those who want to take the usual route to the park, they may drive straight along Jalan Kecil Sungai Liang, and turn left at the junction at the end of the route. The park can be seen on the right driver’s side, with ample parking spaces, though on busier days, the cars will be parked along the road. To go to the beach, visitors can opt to drive further down the road, though they have to walk across a bridge before reaching the coast.