May 15, 2013
Geographical place names give insight into country's local culture 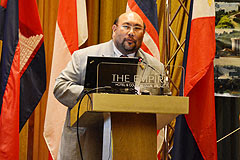 Bandar Seri Begawan, 13th May 2013 - GEOGRAPHICAL place names allow the rest of the world to get a clear insight into the local culture of a country, the permanent secretary at the Ministry of Culture, Youth and Sports (MCYS) said yesterday.

Speaking during the United Nations Group of Experts on Geographical Names Asia, Southeast Seminar, Hj Mohd Rozan Dato Paduka Hj Mohd Yunos said there are many theories about the origin of the name of this country "Brunei Darussalam" with the most famous being that it was passed down the generations through a poem by Awang Semaun.

"It is about how the exclamation 'Baru Nah' on the discovery of the Brunei River that was to be used as a new settlement for families later became 'Brunei'," the permanent secretary said in his keynote address, "An Introduction to the History of Geographical Place Names in Brunei".

"In this country, according to one research paper in the 1996-1997 issue of the Brunei Museum Journal, toponymy (the study of place names) is still more or less an open field.

"If taken in earnest, the study of toponyms can provide significant knowledge about the culture of Brunei, whether in the past or present."

"For historical names, examples include Jalan Kustin, where Coastin was a construction company which used to be based at the end of the airport runway when the new airport was being constructed. This was officially renamed Jalan Terunjing Baru but recently re-appeared again as Jalan Kustin when the Public Works Department put up the signboard at the new roundabout near the airport."

The permanent secretary then said a prime example of a commemorative name is Bandar Seri Begawan, which commemorates Sultan Hj Omar 'Ali Saifuddien Saadul Khairi Waddien, who took the title Seri Begawan Sultan when he abdicated in 1967.

"For numerical names, we now have many streets in the housing development estates that use these such as Jalan 10 or Jalan 77 in the Lambak Kanan area or use alphabets such as Jalan 'A' in the Mentiri area."

In the third part of his keynote address on tracing place names in Brunei, he said that even though the origin of a name can sometimes by a mystery, even the lay public could guess that Kota Batu must have had a stone fort at some time in its history.

"True enough, there used to be a stone fort built across the river as the main fortification of the Kampong Ayer settlements," he said. "Traditional formal history suggests that when the capital of Brunei was moved from Puni to the present area, the name Brunei came into being when the founders discovered the capital and exclaimed 'baru nah', which is literally translated to 'now we found it'."

A statement said an atlas of place names with the correct spellings and location avoids the likelihood of duplication or misunderstanding, which is of particular importance in search and rescue operations.

-- Courtesy of The Brunei Times --

Unknown said…
Attractive piece of information, I had come to know about your blog from my friend arjun, Hyderabad, I have read at least eleven posts of yours by now, and let me tell you, your website gives the best and the most interesting information. This is just the kind of information that i had been looking for, and I would regularly watch out for the new posts, once again hats off to you! Thanks a lot once again, Regards, Baby Girl Names
Tuesday, June 11, 2013 12:04:00 PM