Bandar Seri Begawan, 12 March 2013 - FOUR locations in the country have been identified to have the potential to be recognised as UNESCO World Heritage Site and the appropriate framework has currently been undertaken by various agencies, spearheaded by the Ministry of Culture, Youth and Sports (MCYS) in preparing a tentative list to nominate the locations recognised as a World Heritage Site. 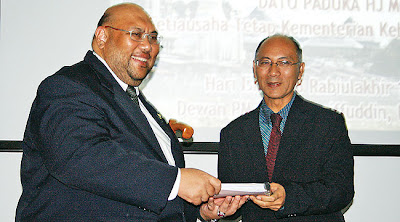 The four locations; Tasek Merimbun Park in Tutong, Abana Rocks Coral Reef Formation; the Brunei River and Industrial Heritage of Colliery in Muara are being included in a final report, following a nine-day deliberation in a workshop which was officially closed yesterday.

The workshop, held towards the preparation of the Tentative List World Heritage Nomination Procedure (UNESCO-World Heritage Convention 1972) for Brunei was organised by the Brunei Museums Department and was attended by 20 participants and three observers from various government ministries and its departments including the MCYS, Prime Minister’s Office, Ministry of Home Affairs, Ministry of Development as well as the Ministry of Industry and Primary Resources.

Officially closing the workshop at the National Archive Building, Jln Dewan Majlis, yesterday was Awang Haji Mohd Rozan bin Dato Paduka Haji Mohd Yunos, Permanent Secretary at the MCYS who was also the guest of honour of the event.

A summary of the workshop was also delivered by an expert in world heritage and the workshop’s facilitator, Dr Richard Adams Engelhardt, UNESCO Chair Professor of Culture Resource Management and Former Regional Advisor for Asia Pacific Culture, Bangkok, Thailand.

Dr Richard said that although countries go through a lengthy process in getting a location recognised as a world heritage site by the approving body, it goes a long way to safeguard Brunei’s heritage for generations to come.

According to Awang Bantong, the workshop was a follow-up to the first workshop held early last year to formulate framework of actions to nominate a world heritage site for Brunei, in line with the World Heritage Convention 1972 which Brunei has signed.
-- Courtesy of Borneo Bulletin --