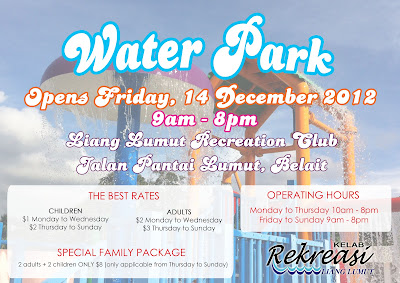 Seria, 15th December 2012 - THE country's first water amusement park made a splashing opening as gates opened for the first time to visitors across the nation flocking for the chilled, crystal clear waters, and water play areas.

The park, which took four years in the making, was thought of for quite some time, according to the park's General Manager Nisa Halim.

Despite the opening, thoughts of expansion are set in motion: "We're also looking at more facilities to expand the water park, the area has been cleared, so hopefully we can conjure up a few ideas, such as wakeboarding, and so forth," said Nisa.

"This is great," said a mother of three, from Lumut.

She added, "Since they closed the previous pool four years ago, my kids have been excited and were anticipating for the opening and now we're happy to be here,"

The family who lives in Lumut expects frequent visits to the area, while commenting that the park can be further improved by adding on more shaded areas.

Mother-of-one Masni Salim, from Brunei Muara said, "I think a place like this is fantastic for the kids on school holidays, and the location is very scenic".

Masni added that a room for improvement could include more play areas, and hopes for the possibility for another amusement park of the similar kind to open closer to the capital.

"I like to see one at Pantai Muara," said Masni on her last remarks.

Father-of-two Hj Mohd Rivan, from Brunei Muara said, "I think my children get too bored at home, so the trip here was worthwhile instead of wasting time at home."

"But the park is still small as it is only for children. I would like to see it expand or hope to see an adult-sized water amusement park, maybe one at The Empire Hotel & Country Club," he added.

The park is expected to accommodate up to a hundred visitors at a time.

The main pool measures 0.8 metres in height and harbours a water playground consisting of a slide and water parosals.

The park is located at Liang Lumut Recreation Club at Jalan Pantai Lumut, Belait. It opens all week on Monday to Thursday from 10am - 8pm, and Friday to Sunday from 9am - 8pm.

Additionally, the park also offer a family package which includes two adults and two children for $8 only applicable from Thursday to Sunday.

- Courtesy of The Brunei Times -