August 10, 2012
A German Doctor contacted me the other day. He was asking for a translation of an envelope written in Jawi. The envelope was addressed to Mr MSH McArthur in 1910 but the Jawi script indicated that the letter should go to his daugher. Mr MSH McArthur was then the Assistant Governor in Singapore. Anyway, this German was apparently an avid collector of stamps including that of Brunei. I managed to read the Jawi script for him and in return he gave me a pdf file of the above woodcut of a scene in Brunei taken from a Hungarian newspaper in the 1850s. 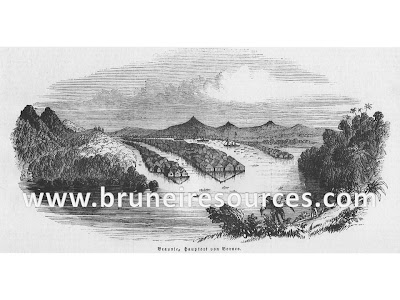 At the back of the woodcut was this explanatory text:

"This is a woodcut from the "Leipziger Illustrirte Zeitung" of 1846 (original size 232 x 120 mm) entitled "Braunie [sic], Hauptort von Borneo i.e. Brunei, principal town of Borneo. On the reverse side there is a long story about other remote parts of the world, but unfortunately the text related to the picture of "Braunei" did not come with the newspaper cutting (from Hungary in fact)."

"The view is from the site of the later British Residency onto Kampong Ayer built on the mudflats of the inner Brunei River. The three steam vessels date the scene probably to July 1845 when Sir Thomas Chchrane occupied Brunei Town with a flotilla of three paddle frigates, Vixen, Pluto and Nemesis. The event is described in the Journals of Edward H Cree, Surgeon R.N., edited by Michael Levien. (Webb & Bower 1981)."