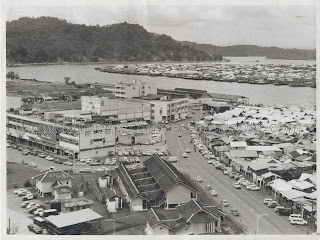 I purchased this relatively old Bandar Seri Begawan photograph recently on the internet. This is a fairly common photograph and I have shown several versions about it. This view was taken from the mosque and over the years I have shown photographs and postcards showing the same view. But what I like about this particular photograph is the size of the photo, it was an 8R black and white and all the details came out well. This photograph was around the 1970s.

The old Police Barracks in the foreground was completely demolished to make way for the expansion of the Padang for the 1984 Independence Declaration and of course later on for the Yayasan Building project in the early 1990s. All the wooden shops along the street were later removed and became the location of the Yayasan Building. If I am not mistaken there was a fire too which gutted many of these old shophouses though I cannot recall when that was.