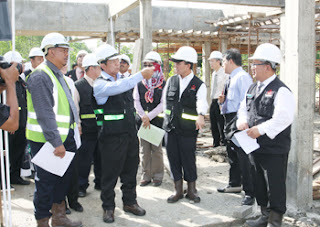 The Ministry of Development (MoD) has set the ambitious target of slashing the time it takes to get approval for the two stages of construction – land development and building – from around 50 days to 24. The ultimate goal is two weeks or less, with a recently established agency tasked with streamlining bureaucratic procedures. The Authority for Building Control and Construction Industry division (ABCi), a unit of the MoD, now has the lead role in coordinating and processing applications for building and land development for residential, commercial and industrial purposes.

The minister of development, Kaya Indera Pahlawan Setia Suyoi bin Osman, told local media on July 2 that the establishment of ABCi was a response to calls by developers for the government to address lengthy permit approval procedures.

According to the minister, up until last year approvals for land development took 52 days to complete, while those for construction permits took 54 days. Since the ABCi has been in charge of the application process, this timeframe has been reduced to 24 and 26 days, respectively, though Suyoi said that even this was too long, and that the next step was to cut the period for processing to 24 days for the combined processes.

“I hope the process for both procedures can be further reduced to 14 days in order to provide the public and private sectors with a more efficient service as is in line with the government’s effort in facilitating the ease of doing business in the country,” the minister said. Such measures would make Brunei a more competitive and transparent place in which to conduct business, he said, with the streamlined processes serving to attract investment and people.

The acting head of the ABCi, Pengiran Adnan Pengiran Badarudin, said that with the addition of the BCU, all of the necessary steps for construction approval had been brought under the control of one authority. “We are adding another function so it will enable ABCi to have the whole package that is comprehensive,” he said. “Now that it is under one roof, and we are being assisted by the Fire and Rescue Department, the Ministry of Health and the Electrical Department, we are able to quicken the process.”

This fast tracking of construction approval will no doubt meet with the approval of the World Bank, which placed Brunei Darussalam 74th globally in its construction procedures category in its “Ease of Doing Business” report, saying the Sultanate has 33 separate steps that must be taken before a construction permit can be issued. It does note, however, that many of these can be carried out simultaneously.

By establishing and reinforcing the ABCi, Brunei Darussalam is moving to implement the advice of the World Bank, which recommends that countries set up one-stop shops for construction approval as a measure to prevent the overlapping of responsibilities and to better coordinate bureaucratic processes. With the fast-tracked construction approval process up and running, it is likely that Brunei will climb more than a few rungs up the “Ease of Doing Business” ladder next year. If further reforms are put in place, the Sultanate should be able to build on this year’s achievements.


The government has also moved to increase environmental awareness in the building industry. The MoD has announced it will soon be releasing new guidelines to ensure all building sites meet required standards regarding flood mitigation, erosion prevention and water and air pollution controls.

Though building contractors may have to factor in additional costs in their projects to meet new environmental standards, any such outlays will be minimal, especially when compared to the fines the state could levy for damage to the country’s sensitive ecosystem.

While the World Bank has cautioned that increasing the speed of approvals processes should not see standards lowered, it appears that Brunei Darussalam, with its recent and pending reforms, is working to build on quality control while also cutting red tape. 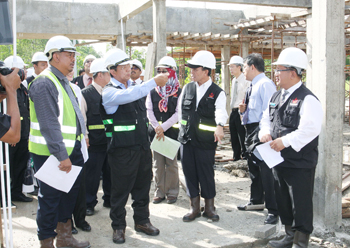 Few things that struck me on the OBG report. First it mentioned about boosting FDI and encourage local construction company due the streamlining the process.

On the note of boosting FDI, I am curious as to why Brunei needs foreign money to develop the country? Is Brunei dollar not good enough? Or is Brunei running out of Brunei dollar just like her oil and gas?

Eversince, the world currencies came off from the last remaining gold standard in 1971, today's currencies are FIAT money. Currency that are not being backed up with any tangible commodities or assets. It is back up with government faith that issue that particular currency. And Brunei dollar is no exception.

In essence, Brunei can create as much or as little as Brunei dollar she wants for developing the country. This is because we can never runs out of government faith.

As for boosting local construction company, well, yes it does. However, it does not translate into boosting Brunei economy and create the necessary employment for the local.

What is being noticed that majority of people working in the construction sector are foreigners. Very few are local.

Thus money spent by the government through this construction boom does not trickle back into Brunei economy.

How about the Tukar Milik / Pembelian / Penjualan tanah proceses? Are these going to be shorten as well?

Anonymous said…
the problem is that we have these TPOR and yet how many of them are actually meeting the targets?
not only the tukar milik takes ages, even the approval of house plans takes a long long time to approve and it can take more than a year..
hope Tuan can look into it.
Friday, September 09, 2011 10:40:00 AM

I don't think I know enough economics to respond to your argument, but I just want to say that I think you're out of tune with a few/some of your points.

Also, I visited your blog (http://brunei2035.blogspot.com/) and found that although it could be beneficial for the public to read it, I think you should put quotation marks where they belong or proper indications for words and phrases that aren't yours (those that you put out as your own 'personal ramblings'). Too much copy pasting, huh? Just saying anyway. :)

It's interesting to note that ABCi is there to fix the bigger problem ie, to cut down on the approval's lead time. However, recently quite to my amazement, my final drawing submission was deemed to be "lost" by ABCi and I've to resort to resubmitting them again. It's very frustrating having waited for some time and to learn about the unfortunate circumstance only after direct follow up. Where are we covered in terms of ensuring that it will not happen again or probably this is an "acceptable" norm which the public has to swallow nevertheless ..sigh.. I just have to pray hard and hope for the best that it will not happen again but whether I like it or not, it will be another time lost at least another month for me and certainly not to ABCi.

vichu said…
Great thoughts you got there, believe I may possibly try just some of it throughout my daily life...