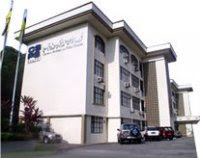 Someone asked on the comment box, whether I know of any think tanks in Brunei. I thought that was an interesting question and certainly pushed me to think what is meant by think tanks and how many there actually are there in Brunei. In its simplest form, a think tank is a body of experts providing advice and ideas on specific political or economic problems. At its most complicated, a think tank (or policy institute) is an organization that conducts research and engages in advocacy in areas such as social policy, political strategy, economy, science or technology issues, industrial or business policies, or military advice.

For the list of think tanks that are now in Brunei, I had to rack my brain a bit. After all that thinking, I came out with the following list:-

This is certainly the most established of all the think tanks in Brunei. It was at first the ASEAN-EC Management Centre funded by European Communities and hosted by Brunei from 1992. The issues it dealt with were mostly human resources but it did deal with other issues. But with the end of the funding, the government set up the CSPS using the existing building.

The Centre for Strategic and Policy Studies (CSPS) was officially established on July 1st, 2006. It is a Corporate Body and is governed by the “Centre for Strategic and Policy Studies” Act 2006, Brunei Darussalam. According to the CSPS Act 2006, under Article 83(3) Section 13 (a), it is stated that the function of the Centre shall include “the advancement and dissemination of knowledge and the promotion of research on Brunei Darussalam and on all matters appertaining to Brunei Darussalam’s interests”. The establishment of the Centre is seen as a mechanism for inputting information to relevant stakeholders to facilitate intelligent, informed and educated decision-making. It could also play a role in monitoring and evaluating the effectiveness of the current policies to make policy refinements, terminations or other policy decisions possible.

This think tank was a founder member of the Network of East Asian Think Tank as far back as 2002. There is more information about NEAT than there is about the think tank itself.

Officially recognized at the “10+3" summit meeting, Network of East Asian Think-tanks (NEAT) is a mechanism for research and academic exchange, and a platform for the second-track diplomacy in the regional cooperation among “10+3" countries in East Asia. It aims at integrating the research resources in East Asia, promoting the academic exchanges and providing intellectual support for East Asian cooperation. To be more specific, by establishing a network among East Asian think-tanks, governments and enterprises and promoting the interaction of these three circles, it intends to study the key issues related to East Asian cooperation, work out strategic ideas and concrete policy suggestions for the regional integration and submit research reports to the “10+3" summit meeting.

In 2002, East Asian Studies Group (EASG), the second-track in the mechanism of East Asian cooperation, suggested 17 short-term measures to be taken for closer cooperation among East Asian nations, among which was establishing “Network of East Asian Think-tanks" (NEAT) within the framework of “10+3" regional cooperation. The suggestion was adopted at the informal meeting of “10+3" leaders held in Phnom Penh, Cambodia in September 2002.

The activities of NEAT fall into the following categories: 1) Hold annual conferences of NEAT members to promote exchanges among East Asian think tanks and submit an annual work report to the informal meeting of “10+3" leaders on the basis of the research of the key issues in East Asian integration process; 2) Set up a website of NEAT, bridging the governments with the academic circles, promoting the academic exchanges among scholars about East Asia, and educating the masses in the region; 3) Hold irregular international seminars on East Asian cooperation so as to facilitate the theoretic research on the integration and community building of East Asia and help to shape the theoretic framework, strategies and specific policies conducive to the regional cooperation in East Asia. 4) Cooperate in the research of the key issues in regional cooperation and figure out the solutions.

The Ministry of Foreign Affairs and Trade can probably give more information with regard whether the think tank is a physical think tank or a virtual one.

This was set up a few years ago by the Ministry of Defence. The establishment of the Sultan Haji Hassanal Bolkiah Institute of Defence and Strategic Studies (SHHB-IDSS) was officially announced by His Majesty Sultan Haji Hassanal Bolkiah Mu’izzadin Waddaulah Ibni Al-Mahrum Sultan Haji Omar ‘Ali Saifuddien Khairi Waddien, Sultan Yang Di-Pertuan of Brunei Darussalam, in His Majesty’s Titah during the 45th Anniversary of the Royal Brunei Armed Forces on 31st May 2006. The Institute was formally formed, with the appointment of its first Director in April 2007.

The institute is active in organising the annual Brunei Darusalam International Defence and Security Exhibition and Conference (BRIDEX).

The Brunei Research Council has recently been reestablished. The original council was formed way back in the 1980s but it was only this year, it is reformed. It looked after and provide funding for all research done in Brunei done by government agencies. Whether this will be another think tank in the future that remains to be decided. The BRC is under the Prime Minister's Office.

Universiti Brunei Darussalam has set up a number of institutes. Many are teaching institutes but one in particular may qualify as a think-tank:

(5) The Institute for Leadership, Innovation and Advancement (ILIA)

ILIA will focus on being the premier academic center in the provision of research and training on issues and concerns related to the advancement of Negara Brunei Darussalam, with an emphasis on leadership and innovation.

Its missions are: Firstly, to be the premier national institute for the promotion and understanding of responsible innovative leadership and to develop outstanding real world leaders in public, private and social sectors through the provision of training and consultancy. Secondly, to undertake high quality research and consultancy which focuses on advancing our frontiers of knowledge in issues related to change leadership and innovation.

Its objectives are: (1) To be a focal point for research and training on issues and concerns related to the advancement of Negara Brunei Darussalam, with emphasis on leadership and innovation (2) To promote collaborative networking between government, business and academics and society in identifying and exploiting key niches for development (3) To encourage a culture that sees change and evolution as necessary part of advancement and development (4) To raise awareness that leaders roles should come from everywhere to transform organizations and social situations for the advancement of society (5) To encourage a multi-disciplinary approach to problem solving (6) To publish and promote the findings through papers, seminars and dialogue sessions.