Borneo as the Homeland of the Malays 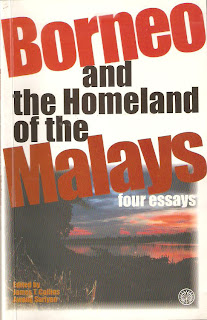 This book is a recent addition to my library. I bought it at Select Bookshop in Singapore for me to read on my trip to Melbourne and Brisbane recently. I have been reading up on the various papers on the origins of the Malays. It was not until recently that the experts have more or less agreed that the origin of the Malays were from South China in Formosa Island (Taiwan).

The Proto-Malays as they were known migrated to the Philippines about 3,000 years ago. They moved slowly downwards towards Sulu and Borneo. This is where the Malay language departed. One group went eastwards towards Sulawesi and the Oceanic Pacific islands. The other group went to Borneo and settled there as well as go down the Borneo Island and ending up at Sumatera and the Peninsula Malaysia. Remember this process took years. By the 7th century, Sumatera had risen up and slowly too were the states of Malaysia. Influenced by the Indians and the Chamic empires, the Malay states rose too. By the 7th century, the first Malay empire stated to rival those of the Indian and Chamic empires.

These proto-Malays are known now as Deutro-Malays started to repopulate the coastal areas driving the original Proto-Malays deeper into the jungles and deeper parts of the Borneo island.

Nobody really knows this is what happened. There were no records. The only records were our language. The shifts and the changes to the words we used in the various Malay languages and the languages related to us. The hyphothesis both lingusitic and archaeological were discussed in a colloquium in KL in 2000. This book recorded the major 4 papers. If you are interested in the past of where you came from, get the book.

I read some of your articles carefully and your content can be really useful for my readers who wants to discover the real Brunei !
In consequence, I decided to select your blog !

I would like to know if you would be interested to appear on my web portal? It will increase your visibility on internet, increase your visits, and provide good information for my users.
Send me an email at greenty.com@gmail.com and I will try to answer within 24h.