September 23, 2007
[Note: The following article was published edited in the Golden Legacy Column of Brunei's national newspaper, The Brunei Times, on 22nd July 2007.]

As everyone stood rapt to attention at the Taman Sultan Haji Omar Ali Saifuddien Saadul Khairi Waddien to the national anthem being played, the 21 cannon volleys reverberated throughout Bandar Seri Begawan thus marking the beginning of His Majesty The Sultan and Yang Di-Pertuan of Brunei’s birthday celebrations.

The firing of the cannons by the Royal Brunei Armed Forces is a centuries old tradition adopted not just in Brunei but throughout the world.

Not everyone knows the origin of the firing of the gun salutes and even why 21.

It is said that the origin of gun salutes is usually attributed to soldiers demonstrating their peaceful intentions by intentionally placing their weapons in a position that rendered them ineffective.

And one way to render cannons “ineffective" was to fire them as reloading cannons in the ancient days was a very difficult affair. Originally at sea, seven shots became the norm due to superstition and mysticism about the number seven.

However on land, with more supply of gunpowder, they could fire three guns for every one shot from a ship, so a salute from a ship of seven guns would be answered by a salute from the shore batteries of 21 guns.

With improving gunpowder technology and storage everyone adopted the 21 gun salute including us in Brunei Darussalam.

Similarly not everyone knows that cannons had been manufactured in Brunei at least 500 or 600 years ago. Many cannon moulds had been found at archaeological sites throughout the country. 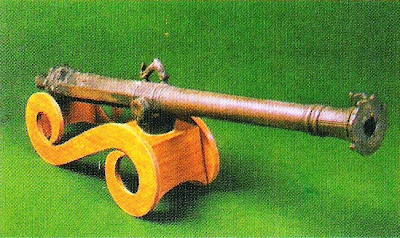 Many historical records also indicated that cannons had been used in Brunei. The historical records of Antonio Pigafetta when he was in Brunei as Magellan’s chronicler in 1521 stated that “in front of the Sultan’s palace, there was a thick wall of bricks, with towers in the manner of a fortress on which mounted fifty-six brass and six iron cannons.”

The Bruneian cannons known in the Brunei vernacular as “bedil” are used not just on land but also on board Brunei ships. One record during the Spanish attacks on Brunei stated that the Brunei ships used cannons.

The origin of the cannons is unknown but most probably that of Chinese and European origins as they were the first to use them. The first cannon in Europe probably appeared during the Islamic era in Spain. Brunei cannons probably are more influenced by our relationship with the Chinese Empire.

In Brunei, the art of casting metals had been in existence for many centuries. As far back as 1225, during the visit of one Chinese official, Chau Ju Kua, he found that the Bruneians had been carrying swords and metal armour made of bronze when attending funerals.

It was said that during the era of Sultan Bolkiah, the fifth Sultan, 40 Javanese metal craft experts had been brought back to Brunei to teach their craft to Bruneians.

Cannons played important roles in Brunei’s history. They were used as Brunei’s main defences and a good number were positioned at the mouth of the Brunei River and were placed there until the British came to Brunei in 1846. 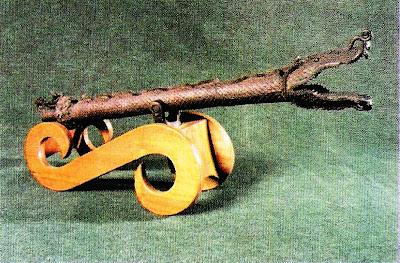 Some of the cannons were well known that they had names such as Si Tunggal and Si Dewa. These two were taken by the Suluks during the Brunei civil wars and later taken to Manila. Another well known cannon during Sultan Bolkiah’s reign was Si Gantar Alam which was used during the attacks on Luzon and Manila.

The Brunei cannons had their own attributes. In the manufacture of the cannons, the local craftsmen would pay attention to eight main parts of the cannons known locally as the batang (barrel), muncung (mouth), kancing lumba-lumba (trigger), pistaran (sightscope), sumbu dan gargasa (ignition), gamban (barrel end), gaganok (holder) and sangka (holder).

Each of this part would be intricately designed with Brunei motifs thus distinguishing the Brunei cannons from other cannons in the world.

Cannons are not just used for defensive purposes but played important role in the royal courts.

Cannon shots are fired on many important royal events with different numbers for each event. The highest obviously are events connected to His Majesty the Sultan and Her Majesty Raja Isteri, of 21 shots.

During Royal Wedding ceremonies, another set of numbers including 12 fired to mark the beginning of the Royal wedding ceremonies and 17 during the ‘nikah’ and other occasions.

Brunei cannons are also used in the economy where they are also used as monetary tokens, payments and for the use of payment of fines.

A number of exhibits at the Currency Gallery of the Brunei Currency and Monetary Board are miniature cannons between 6 inches and 12 inches long which were used as currency in Brunei in place of coins and other monetary tokens. It was said that the value of these miniature cannons can be as high as $30 (straits dollar) each. 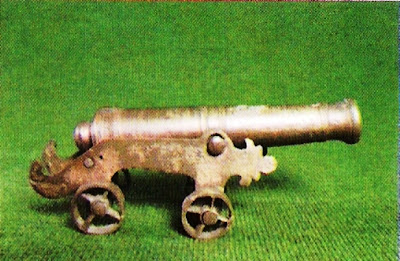 Cannons were used as part of the dowry to be paid. In Belait, a groom had to send a cannon among other items to the bride’s family. Cannons were also used as tribute payments. When an ‘Orang Kaya’ – a titled local minister died, landowners had to pay a tribute of a cannon. Cannons were also accepted as replacement of other punishments in some Brunei ethnic cultures.

One interesting use of a Brunei cannon had been found used to mark a grave in Rangas.

Brunei cannons are unique and it is one of our few remaining historical assets.

The "bedil" and "meriam" are from Java as are both terms and most of the Brunei dialect borrowed from Javanese.
Java was the dominant power for all of the archipelago's history. Teh majority of all Archipelago trade was destined for Java.
Furthermore the Sultanate of Kalimantan was a Javanese vassal for hundreds of years, known as Pulau Berlian, due to the Jvanaese love of their diamonds.
Kalimantan diamonds decorate another Javanese innovation, the keris, or as Malaysians in their vulgar tongue mispell it- kris.

Current archeological research indicates it was Javanese who began smithing in bronze hundreds of years prior to the CHiense.
The oldest Indian remnat is 3300 BC, Javanese 3000 and CHinese 2200 BC. Then later introduced it via Vietnam into China (like Buddhism), not the other way around (The Origins and Spread of Agriculture and Pastoralism in Eurasia By David Russell Harris).
This is supported by HIgham (The Bronze Age of Southeast Asia), who states Han Chinese only encountered Bronze in 600 AD, from "Southern Barbarians", quoting Wei Zheng's "Sui Shu".

The Chinese rarely used "gonnes" or handguns and handcannons outside China and the most common Chinese gunpowder weapons was the fire arrow. Cheapo, effective, accurate and deadly- which cannon in those days were not.

Cannons were introduced mainly by Arabs and Indians into the entire region.
They entered both Aceh and Java around 14 C.
Most likely Brunei recieved cannon as part of trade with either Aceh or Java.
I quote" ...it so happened that the Chinese government, for reasons of its own, prohibited the construction of seagoing ships in 1436. Chinese shipbuilding therefore decayed to the furtive levels that illegal "pirates" could sustain long before the first European ships, with their cannon, showed up on the China coast.
The Moslems, who had played a leading role in Indian Ocean commerce for centuries, and who had successfully rolled back Christian sea power from the eastern Mediterranean after 1453, did not simply acquiesce in the sudden appearance of European ships in seas they had been accustomed to dominate. Ottoman rulers, after all, were acutely aware of the importance of big guns, as the capture of Constantinople showed.
But their naval administrators were unable to imitate Europeans' prodigal use of cannon on shipboard because Mediterranean skills and traditions of naval architecture (not to mention shortages of metal) stood in the way.
Nevertheless, after the news of Vasco da Gama's arrival in southern India in 1498 reached the sultan's court, the Ottoman government dispatched expert gun makers to Sumatra so that the local Moslem ruler might better protect himself from the European threat. In addition, the Ottoman government built a navy in the Red Sea to guard the holy cities of Mecca and Medina from infidel attack and drive the Portuguese from the Indian Ocean, as similar Turkish fleets had driven the Venetians and other Christians from the eastern Mediterranean.
Needham's "Science and Civilisation in China" clearly details Chinese vase or bottle shaped cannons on page 316. In the same text, page 324, details he use of DOUBLE-ENDED cannon for use at sea, since the clever Chinese worked out it could fire twice as quickly.


All Brunei cannon are exact duplication of Javanese- including the floral vine motif and the use of the half diamond pattern. It is Java that first mastered bronze work for religious iconography and gamelan gongs.Brunei imported the skill.
The hint it is Arabic NOT Chinese is the shape.
Chinese cannon were shaped like a beer bottle (the thickest part in he breech so as the poor or unknown quality metal would withstand the force of the ignition), then from 15 C on these were shaped with multiple reinforcing rings integral to the case.
This is not evident in any Archipelago gun.
Furthermore Chinese cannon as a rule are undecorated, plane and cast iron.
All Archipelago guns, hand cannon and swivel guns are based on that of the Ottomans an Portuguese- the tapering of the barrel, common use of elaborate motif and lack of any reinforcement that conclusively and inarguably proves the European origins of this weapon NOT CHINA
Saturday, February 14, 2009 1:24:00 AM