September 29, 2007
[The following article was published edited in the Golden Legacy column of Brunei's national newspaper The Brunei Times on 29th July 2007, 2 days before the expansion of the territory of Bandar Seri Begawan.]

Even though Brunei’s capital city had been in existence for at least 500 years, the capital city on dry land is relatively new. Last year, Bandar Seri Begawan celebrated its centenary being on dry land.

Prior to that Bandar Seri Begawan or Pekan Brunei as it was then known was a city on water. Peter Blundell in his book ‘City of Many Waters’ published in 1923 stated that the “town was unique, the only one in the world built almost entirely over the water, and the Bruneis were justly proud of it. They were folks who live a semi aquatic life, and their methods of living, household arrangements, family life, and town government, adapted as they had been to life over the water.”

When did the capital move to dry land? The official record was that of the first British Resident, McArthur, who wrote in his report the following words “I want a clean, dry village with suburbs of kampong houses. I also want to discourage building on dry land.”

However it took a cholera and a small pox epidemic in 1902 and 1904 with many people dying before Bruneians then would consider moving themselves away from their traditional way of life over the water. Peter Blundell in that same book also bluntly wrote that it was “apparent that the cramped conditions under which the inhabitants lived, the damp, the lack of exercise, and the germs in the filth and mud under the huts could not but affect unfavourably the health of all the inhabitants.”

A group of Chinese businessmen moved out from Kampung Pekan Lama (then known as Kampung Bakut China) which served as the business area in Kampong Ayer, and started to build their shops on dry land. In 1910, there were six shops, the year after, in 1911, there were 26 shops and just before the Second World War in 1941, that number has increased to more than 80 shops.

As for the population, it was not only in Kianggeh and Sumbiling, but they have also moved to Sultan Lama, Barangan, Sungai Kedayan, Tasik, Tungkadeh and Pusar Ulak. Although there were a number of houses now built on those areas, there were still many more left on Kampong Ayer.

The traditional government’s machinery too had to be modernized with a number of Brunei’s population now on dry land. Many of today’s government departments were created and formed in 1906 and subsequent years. There were 21 departments by 1920 and by 1931, there were 31 departments. The forerunner to today’s Bandar Seri Begawan Municipal Council itself was created in 1921 then known as the Sanitary and Health Board and was responsible for the cleaning and health of the new town.

Schools were beginning to be built. A mosque known as Masjid Pekan Brunei (also known as Masjid Marbut Pak Tunggal), sited near the current Sultan Omar Ali Saifuddien Mosque was also built but that was destroyed during the Second World War. 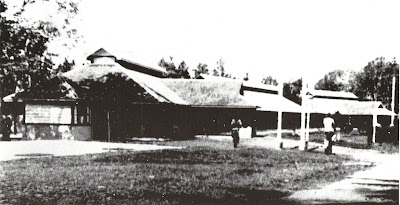 p o t a t o said…
Given the image of the place, shouldn't renovations and reconstructions be the emphasis rather than expansions?

Why make the city bigger when what we already have is not quite appealing to the majority of population and tourists as well? I must admit I'm being pretty presumptious here. But is there nothing being done to resurrect the city's image as the Capital City?

With the exception of seasonal celebrations and events, it's not the number 1 destination for a day out. Correct me if I'm wrong, but I see Gadong as a more high-street district than BSB.
Saturday, September 29, 2007 2:42:00 PM

Anonymous said…
We had a blast in BSB when we visited in 2003. What a beautiful, clean city! We enjoyed ourselves very much.

Ian and Wendy Sewell
Our photos from our trip to BSB

Anonymous said…
I love this blog. hats off to the owner ;)

nonetheless regarding the expansion of bsb, its cool with me. only that, i'm curious of when the urban planners ?or the authorities would scrap down that piece of huge building on sg. kianggeh or the least renovate it to everyone's convenience? what happen to it actually? anyone knows behind story of it?

as citizens, we really do have albeit of concern somehow in regards of our beloved city. at this instant, the city is figured as peaceful,calm and quiet as it is and that's good for me, but for some . .some also had gruesome comments and critics to the ancient village plus the city. some necessarily true and should be tackled as positive comments to brought up its nostalgic moments. scratch the negative stigmas and comments but we must focus more on bringing back prestigious and we must believe in that. (oh please please please in planning, or whatsoever don't forget the toilets with constant maintenance plus u know what, its the most basic necessity that shouldn't be ever any less notified) i believe that there had been nice nice plans on reviving the water village as well as the waterfront plan, "perhaps" its juz a nick of time, capacities to drive that change. Come on, we can do it!

personally, bsb had their seasonal moments such that un6 mentioned earlier. yes that's true and we always have ways to appreciate it, all rushed to bsb and suddenly bsb is a big hit..words like "inda kamu ke bandar , ada perayaan?" often heard. its seasonal, its unique, even friendly foreign friends appreciate that seasonal moments glory ~glory~glitters~glitters

there was moments when i was around one of the high-rise building at night, facing the view of kg ayer, i thought to myself, how bsb is potent to be one of the specialized centres for residentials..perhaps diplomatic residentials? trust me, the view was breathtaking!