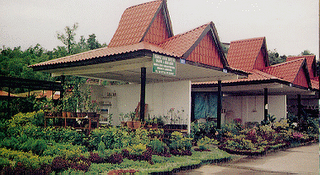 I was out in Rimba yesterday at the Horticulture Centre. Previously I used to go there every couple of months searching for plants and flowers to add to the collection at home. Sometimes it's just simply to buy earth, fertilizers and flower pots. Over the last year, I have been too busy to do that and I noticed lately that my plants growth seemed somewhat stunted and before being accused of plant cruelty, I thought I will have to get some fertilizer at least. At least that's my justification. My better half tells me that I am buying instant flowering plants just to make my plant collection look better for Hari Raya. Heh. Maybe.

The Horticulture Centre (check out their website) was established in 1979 though it was only in 1992 when it became the centre for horticultural business; have changed since the last time I went there. Maybe not a lot but it seemed to have improved. What used to be underused car porches have been turned into small stalls to sell related horticulture products. The one I noticed was an aquarium seller and that seemed to be well stocked with all the paraphanelia that you would need to start a small aquarium at home. The other stalls are horticulture related. Unfortunately none of them were open at 8 in ther morning when I was there, so I was not able to see up close what they were trying to sell.

The existing plant stalls seemed not to have changed despite me not having gone there for quite some time. They were all selling the same plants, fertilizers and earth. Though up close, I noticed that they are now promoting plants which are not native Brunei plants. These tended to come from Thailand or rather Bangkok which one of the sellers persist in saying. I am pretty sure Bangkok itself does not sell plants but I was not about to argue about semantics. Maybe today's customers like exotic plants or there is not much variety in Brunei's plants. I am not sure about the biodiversity thing in having foreign plants coming to Brunei and the economics of all this, that I have to leave to the agriculture experts.

The other thing that seemed not to have changed was the prevalence of Indonesian workers. Practically every single stall you go to, there would hardly be any Bruneians about. The one stall which I managed to find was right at the end where this kindly 60+ lady gave us lots of of extra plants and I only spent some $30 there. Some would argue that more Bruneians should be manning the stalls. But then I am not sure whether it would be worthwhile for our fellow Bruneians to be sitting there, apart from this retired lady, as there is a cost to sitting down and waiting for customers. But having said that, there are plenty of unemployed Bruneians. But then again having said that too, would they be willing to work for $300 a month?

There are lots of interesting economics in the horticulture market. Maybe someone would be able to write about it. Or maybe someone has, but I have not come across it yet. But to whoever happened not to have nodded off towards the end of this post who are able to work out all the economics of it, I do hope that you will be willing enough to write about it.PS. BLOGSPEAK! My heartiest congratulations to the Brunei bloggers for becoming Brunei Times' Star Bloggers in their blog. Check out their blog entries - Ranz, Emma, Maurina and LSM. Maurina and LSM were already well up and established in the blogosphere world and were among the first outside my immediate circle to notice Bruneiresources and post comments when I first started on spaces.msn.com last December and encouraged me to move out of spaces.msn into blogspot.com. Ranz, so far is the only one I have met in real life and he is as Emma describes him, his looks belie his ability. I owe Ranz big time. It was Ranz's plugging that was responsible for jumping the average daily readership on bruneresources from double digits to 250 in May, without which base, I will not be seeing the 600 daily readers nowadays. Emma, I have only known through the internet world but I am sure will get to know more now that she will be writing for BT regularly. These are four experienced bloggers and BT chose the best among the local Bruneians who will be able to tell the world what Brunei is all about.

Anonymous said…
Horticulture is a dear subject to me :)

I learnt that you should add MSG or 'Ajinomoto' with water, spray it on your Orchid flowers. Insya Allah, it will bloom nicely. I only started this tip recently, so I'm waiting for the results. Hehe...

Anonymous said…
Ehehe, THANKS! :) I'm glad I played a part in persuading you to move to blogger. I cannot imagine if you are still in MSN spaces. That place is so bleurgh. Again, THANKS!
Saturday, October 14, 2006 11:25:00 PM