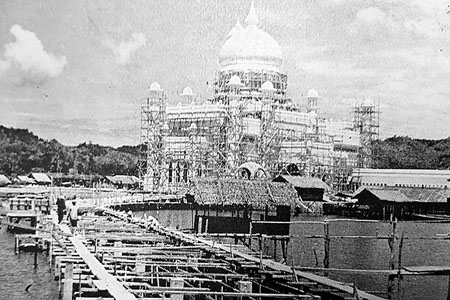 For the first time the villagers walk ashore

MARCH 15, 1958 – A new picture of Brunei Mosque taken from the staging of what will be a pier to extend several hundreds of yards into the Water Village.

The villagers were not slow to connect their house to the staging with planks and so, for the first time ever, they have been walking ashore instead of going by perahu. Soon, a large semi-circular mole is to be built which will embrace the pier and serve to form two artificial lagoons. 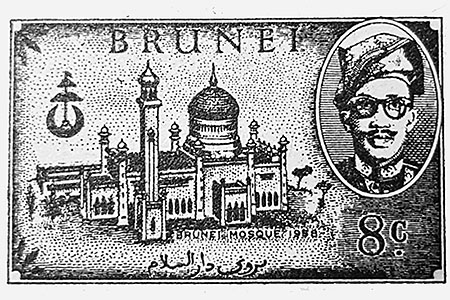 Special issue of stamps will commemorate opening of mosque

MARCH 8, 1958 – To commemorate the opening of Brunei’s new $6M mosque, which is expected to take place some time in September this year, a special issue of stamps has been ordered, and these will become available at all post offices in the state from the opening day.

It is stressed, however, that the issue will be a limited one comprising three denominations only: eight, 15 and 35 cents. Proofs from the designers, UK stamp printing specialists Messrs Brandbury, Wilkinson & Co Ltd, have already been received here.

The same design is being used for the three stamps which depicts the mosque as the centrepiece with a head and shoulders portrait of the Sultan enclosed in an oval frame at the top right-hand corner.

The colours are: green for eight cents, red for 15 cents and violet for 35 cents with the mosque throughout in black.