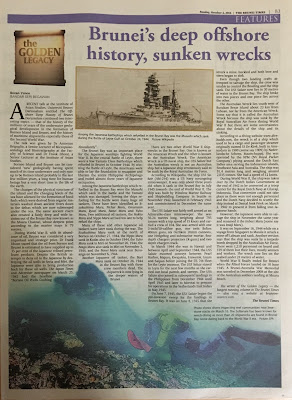 A RECENT talk at the Institute of Asian Studies, Universiti Brunei Darussalam entitled The Offshore Deep History of Brunei Darussalam combined two interesting topics — that of the history of the millions of years of the underwater geological development in the formation of Borneo Island and Brunei, and the history of maritime shipwrecks especially those of the Second World War.

Borneo Island and Brunei can be considered ‘new’ geologically having spent much of its time underwater and only rose up to be Borneo Island probably in the last few million years, a long time for human beings but a very short time in the life of the earth.

The changes of the physical structure of the island and the changing levels of the sea have allowed for the formation of fossil fuels which were derived from organic materials washed down ancient rivers down to the deltas which are now submerged under the sea. The same ancient rivers also created a fairly deep and wide incision out of the Brunei Bay now known as the Muara Channel, whose deepest point according to the marine maps is 79 metres.

During World War II, with its abundance of oil, Brunei was considered a very important and strategic prize. Dr Frank Dhont stated that the oil from Borneo and Brunei is estimated to have supplied up to 35 per cent of the Japanese refined petroleum products. Despite the British attempts to deny oil to the Japanese by destroying the oil wells in Seria and Miri, the Japanese were able to bring production back for these oil wells. The Japan Times and Advertiser newspaper on March 25, 1942 had the headline “Borneo Oil Wells Gushing Abundantly”.

The Brunei Bay was an important place for the Japanese warships fighting World War II. In the crucial Battle of Leyte, there were a few Yamato Class Battleships which refueled in Brunei in October 1944. By winning the Battle of Leyte, the Americans were able to lay the foundation to recapture and liberate the entire Philippine Archipelago and ended almost three years of Japanese occupation.

Among the Japanese battleships which refuelled in the Brunei Bay were the Musashi which sank in the battle and the Yamato which was damaged. Serving the ships refueling for the battle were many huge oil tankers. These have been identified as Itsukushima Maru, Nichei Maru, Omurosan Maru, Ryoei Maru, Banei Maru and Yuho Maru. Two additional oil tankers, the Hakko Maru and Nippo Maru arrived too late to help refuel the ships.

Another Japanese oil tanker, the Baei Maru sank on October 28, 1944 in the Brunei Bay with three crew members dead. The shipwreck is now lying in the deeper waters of Brunei.

According to Wikipedia, the ship USS Salute (AM-294) was a US Navy oceangoing minesweeper. It was only about three years old when it sank in the Brunei Bay in July 1945 towards the end of World War II. The ship was built by Winslow Marine Railway and Shipbuilding Company in Seattle in November 1942, launched in February 1943 and commissioned in December the same year.

The USS Salute was fairly well armed as an Admirable-class minesweeper. She was 56.24 metres long, weighing about 795 tonnes with a top speed of 15 knots and carried a crew of 104. She was armed with one 3-inch/50-calibre gun, one twin Bofors 40mm guns, six Oerlikon 20mm cannons, one Hedgehog anti-submarine mortar, four depth chargers projectors (K-guns) and two depth chargers track.

In March 1944 she was in Hawaii and between April and September 1944, the USS Salute escorted convoys between Pearl Harbor, Majuro, Kwajalein, Eniwetok, Guam and Saipan before joining the US 7th Fleet for the Leyte invasion. The USS Salute stayed in Leyte for the next few months as she carried out local patrols and sweeps. The USS Salute also joined in subsequent landings in the Philippines from December 1944 until April 1945 and later to Morotai to prepare for operations in the Netherlands East Indies in May 1945.

On June 7, 1945, the USS Salute began the pre-invasion sweep for the landings in Brunei Bay. It was on June 8, 1945 that she struck a mine, buckled and both bow and stern began to sink.

Even though two landing crafts attempted to salvage the ship, the crew was unable to control the flooding and the ship sank. The USS Salute now lies in 30 metres of water in the Brunei Bay. The ship broke into two pieces and one piece lies across the other.

The Australian Wreck lies south west of Rusukan Besar Island about 23 km from Labuan, not far from the American Wreck. Some say that it is called the Australian Wreck because the ship was sunk by the Royal Australian Air Force during World War II but there are some uncertainties about the details of the ship and its sinking.

According to a diving website www.divebuddy.com, the wreck is of a ship which used to be a cargo and passenger steamer originally named SS De Klerk, built in Amsterdam in 1900 (some say 1909) by Nederlandsche Scheep, Maatschappij. She was operated by the KPM (NV Royal Packet Company) plying around the Dutch East Indies area serving the Indonesian islands, Southeast Asia and Australia. The ship was 91.4 metres long and weighing around 2,035 tonnes. She had a speed of 12 knots.

During World War II, the ship was taken over by the Dutch Indies Government at the end of 1942 to be converted as a troop carrier for the Royal Dutch Navy at Cilacap, Indonesia. That conversion could not take place as there were not enough personnel and the Dutch Navy decided to scuttle the ship instead at Dental Jonk Priok on March 2, 1942 to prevent it from falling into Japanese hands.

However, the Japanese were able to salvage the ship in November the same year and renamed it the Imbari Maru (some say it was Imaji Maru).

It was on September 16, 1944 while on a voyage from Singapore to Manila it struck a mine off Labuan and sank. Another version says that the ship was sunk by a torpedo bomb dropped by the Australian Air Force. There were 1,210 personnel on board and 339 of them lost their lives, mostly women and workers. The wreck now lies on the seabed under 21 metres of water.

World War II finally ended for Brunei when the Allied Forces landed on 10 June 1945. A Brunei-Australia War Memorial was unveiled in December 2008 at the site of the Australian soldiers landing at Muara beach.

The writer of The Golden Legacy — the longest running column in The Brunei Times — also runs a website at bruneiresources.com.